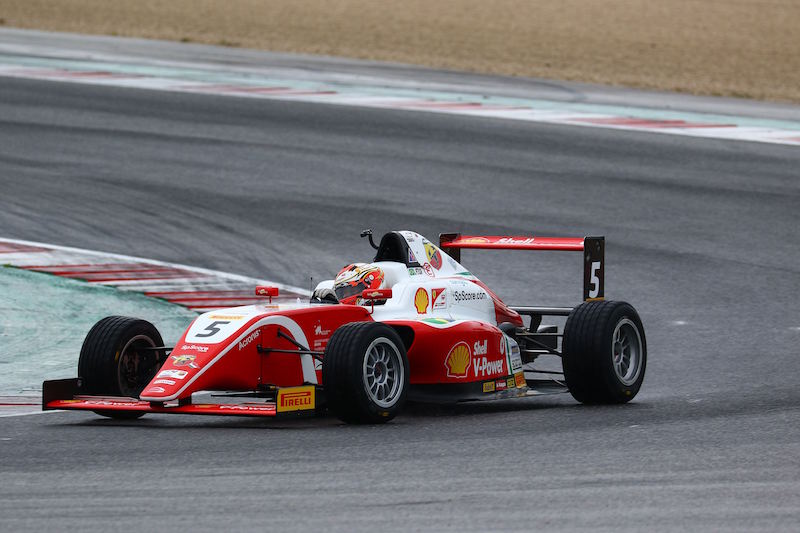 Petecof and Aron split the honours during the two qualifying sessions on Saturday morning, with the former starting from the front in race one, which began behind the safety car due to the conditions.

Once racing began, Petecof was able to build a gap of nearly a second over Aron, but the European junior karting champion suddenly took half a second out of that lead around the half-way point.

With 10 minutes to go, Aron dived inside Petecof at Turn 8 and the pair made contact, with Aron sustaining damage to his front wing and running wide.

Petecof continued to lead while Aron rejoined in fourth behind the Van Amersfoort Racing duo of Dennis Hauger and Niklas Krutten, who tracked the Prema pair throughout the early stages.

Hauger then kept the pressure on Petecof until the end, with 0.943s separating them at the flag.

Krutten was a further second back in third, with Aron finishing a distant fourth with his damage.

Oliver Rasmussen lost a couple of places early on after starting fourth, but gained fifth before the end away from Prema team-mate Alessandro Famularo, who has coach Juan Pablo Montoya on hand this weekend.

Famularo also lost out to Mucke Motorsport’s William Alatalo before the end.

After starting 11th, Joshua Durksen had got himself into 10th position past Lucas Alecco Roy when he was hit into a spin by the VAR driver, who was passed by Meyuhas and then received a 10-second penalty.

Despite finishing 11th, Durksen remains second in the standings, with 40 points to Petecof’s 83.