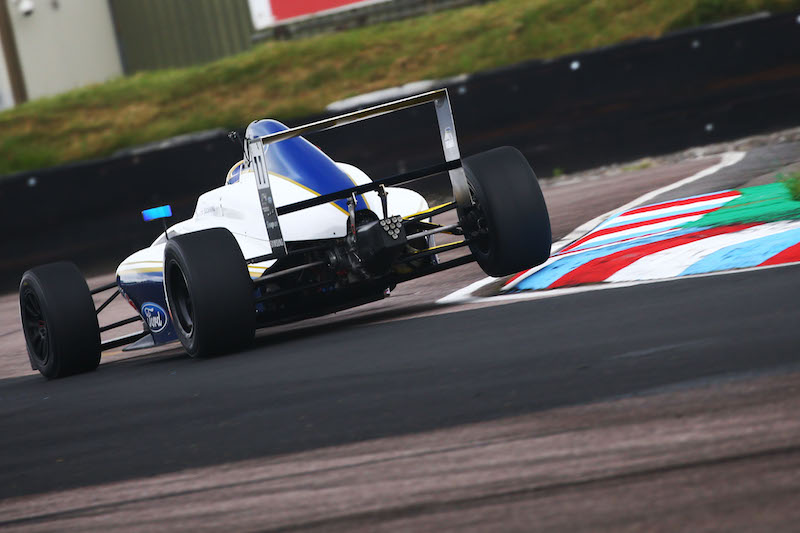 Richardson Racing’s Luke Browning stormed from sixth on the grid to win the opening British F4 race at Thruxton, while pole-sitting championship leader Louis Foster finished down in 10th place.

Foster held the lead on the opening lap, but Browning was able to pass him on the second lap for the lead, after making a storming start which saw him rise from sixth on the grid to second.

Browning then held the lead for the remainder of the race, fending off his nearest challenger Zane Maloney.

Carlin’s Maloney started from second but dropped to fourth after a poor start.?He recovered well and finished just 0.966s behind race-winner Browning in second.

“The speed was very good. When I caught up to Browning in the lead, he backed me up very well,” Maloney told Formula Scout. “He did a very good job, I had nowhere to go. Tried on the outside and inside, but he covered it all off.”

The podium was completed by Josh Skelton, who fended off a multi-car train to take his second top-three finish of the season.

Arden’s Bart Horsten, who won at Donington, went from eighth on the grid to finish in fourth place, ahead of Sebastian Alvarez (Double R Racing), and Carlin’s Joe Turney.

Turney dropped to P11 on the opening lap, but put in a series of quick laps, picking up his second successive fastest lap and a sixth-place finish. Tommy Foster was seventh for Arden, with Roberto Faria and Alex Connor in eighth and ninth respectively.

The top 10 was completed by Louis Foster, who spent the majority of the race tumbling down the order. His championship advantage is slashed from 17 to eight points.

Mariano Martinez and Reema Juffali were the only retirements, after they collided early in the race, bringing out the safety car.