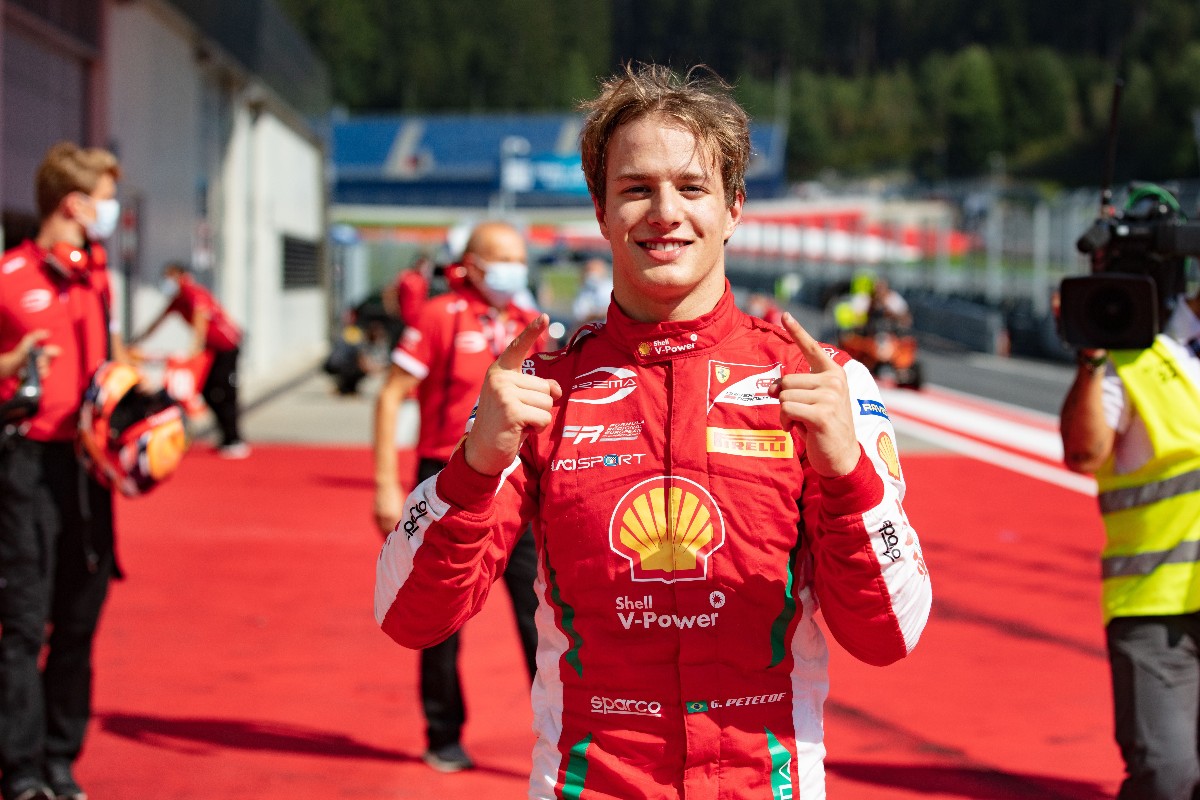 The first lap marked the one of three threats to a Petecof win, with the Brazilian running off the track at the exit of the first corner.

That put him alongside team-mate Oliver Rasmussen on the run-up to Turn 3, and allowed the third Prema of Arthur Leclerc to get involved too.

Petecof pressured one team-mate onto the grass on the inside, then edged out to the wider line for Turn 3 to cover off the other team-mate, and kept the lead for the run to the downhill Turn 4. All three Prema drivers locked up, but Petecof still emerged ahead and with Leclerc in second place after holding off Rasmussen through the next two corners.

After that lap it was an easy run for Petecof until the safety car was called out mid-race for a collision between DR Formula’s Emidio Pesce and KIC Motorsport debutant Nico Gohler at the back of the order that had put Gohler in the Turn 4 gravel after they touched wheels.

There was less than two laps behind the safety car before action resumed, and Petecof was unchallenged in the few corners before the safety car was called out again due to KIC’s Konsta Lappalainen stopping on track.

The third and final threat, the second restart, was handled expertly by Petecof and he sprinted away again to win.

The two restarts kept his Prema team-mates close to one another, and despite numerous lock-ups from Leclerc he did not provide a opportunity for Rasmussen to get through.

Van Amersfoort Racing debutant Alessandro Famularo made a great start to move up to fourth and after the second safety car appearance he was able to stick with Prema’s podium trio.

Jamie Chadwick showed improved form to finish fifth in the next Prema car, but she and VAR’s Pierre-Louis Chovet are under investigation for when Chovet passed her and when she passed him back on the two restarts.

Chovet ended up finishing seventh after he lost another spot to KIC’s Patrik Pasma, who along with Gohler stalled on the grid.

Andrea Cola (Monolite Racing) and Gillian Henrion (Gillian Track Events) got involved in lots of battles, and it was Henrion who finished in eighth – after technical issues ruined his previous two races – as Cola fell to 10th behind Pesce on the final lap.