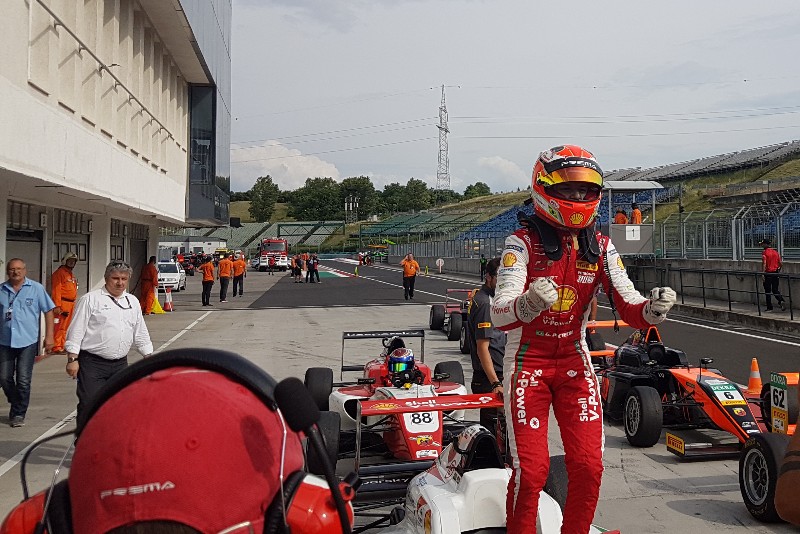 Lined up alongside poleman Dennis Hauger on the grid, Petecof misread grip levels and wheelspan down to 20th place. His error proved of no consequence though, as on the second lap Axel Gnos was pitched upside down and the race was red flagged.

When it restarted over 20 minutes later, it had rained and so the race was classified as wet. The frontrunners were on slick tyres though, and Petecof was able to reclaim his place on the front row.

Hauger made a strong getaway but then stalled, handing Petecof the lead. Niklas Krutten, Mikhael Belov and Roman Stanek all made their way past, but those places had been recovered by Turn 2 when Belov locked up heavily (a frequent occurrence), knocked Krutten off the track and ended Stanek’s race.

Although the rain had gone, there was low cloud and 40km/h winds facing the drivers and being the first into the unpredictable conditions made Petecof’s life hard up front.

Hauger hounded him every lap, and was brought right onto the leader’s gearbox when the safety car was required following Emilio Cipriani riding over the back of Andrea Rosso.

The top two pulled away immediately on the restart, and Hauger was still looming squarely in Petecof’s mirrors when a sudden storm hit the circuit with two laps to go. Both drivers nearly skated off at Turn 1 when they first encountered the rain, and despite the slippy conditions ran side-by-side throughout the final lap of the race.

Petecof just held on to victory, with Ido Cohen taking third after prevailing in a four-wide move on the safety car restart. Belov was the loser in this battle, locking up and losing several places. To add to his misery, he was then penalised for his lap one error.

Krutten recovered to finish 10th, benefitting from a scary last corner crash on the final lap which left Paul Aron and Jesse Salmenautio stuck in the barriers for several minutes.