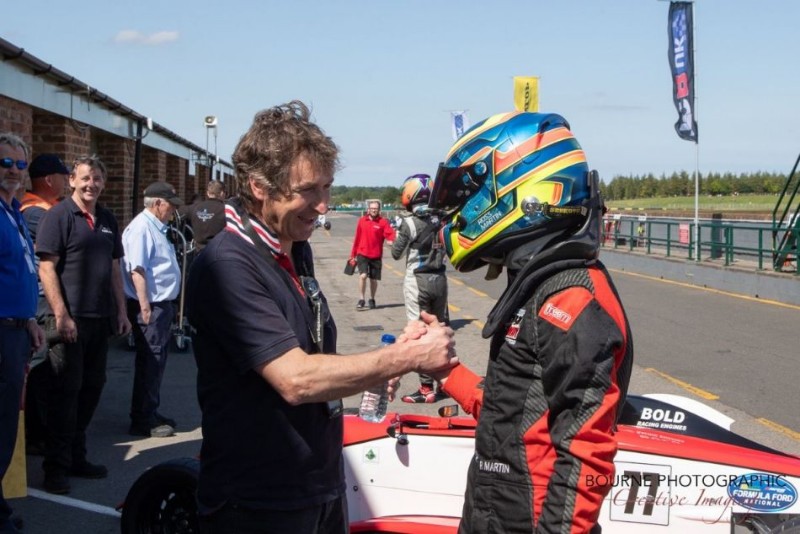 Making a brisk getaway from pole position, the Team Dolan driver already had a couple of car lengths over the chasing pack heading into the first corner. He was unchallenged for the remainder of the race and won by 3.327 seconds.

The bulk of the action was the three-way scrap for the runner-up spot between James Clarke, Rory Smith and Neil Maclennan.

A great getaway from third for Cliff Dempsey Racing driver Clarke propelled him past Smith going into the first corner, though he couldn?t break the tow to the B-M Racing driver. Clarke, Smith and Maclennan then remained line astern for the first two-thirds of 15-minute race.

Smith lost momentum on the long run to Tower after an unsuccessful lunge on Clarke for second, enabling Kevin Mills Racing’s Maclennan to pull off a great move up the inside to snatch third.

Maclennan seemed set to take his first podium of the weekend, but he then ran deep in the second part of the Complex on the final lap, allowing Smith back into third and just short of Clarke’s second place.

The second CDR car of Spike Kohlbecker was a lonely fifth. He made one overtake on the opening lap, but couldn?t bridge the gap to the squabbling trio ahead.

Two-time F1 Esports champion Brendon Leigh fought up the field after a puncture in race one relegated him to a 16th-placed start, taking eighth place for KMR.

John Svensson took Clubman class honours in ninth, battling with Jamie Thorburn for position early on until the Border Reivers driver fell back with technical issues. Svensson was disqualified from the first race, which he also won his class in, for a move on Michael Macpherson. A successful appeal had his win reinstated, and he has extended his championship lead as a result.