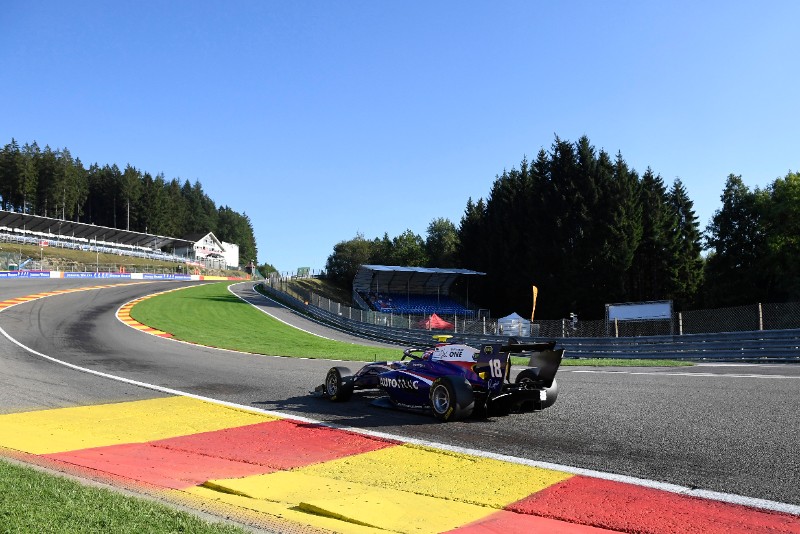 Starting second on the grid, Piquet took the lead away from pole-sitter Daruvala exiting Raidillon on the opening lap.

After a virtual safety car period that lasted for around one lap, Piquet was able to quickly pull out a four-second advantage as Daruvala squabbled with Yuki Tsunoda and Leonardo Pulcini over second.

Pulcini, who went around the outside of Shwartzman for fourth at Les Combes on the first lap, went past Tsunoda and then Daruvala within a few corners at the restart, only for Tsunoda to then jump past both down the Kemmel Straight.

Daruvala eventually worked his way back up to second by lap seven of 17, but Shwartzman was also on a charge, and swept past his Prema team-mate on the run to Les Combes three laps later.

Shwartzman’s clean DRS-assisted overtake helped him to take a slice out of Piquet’s lead, but the Trident driver’s pace dropped off only on the last lap, winning by 2.2s for his first Saturday triumph at this level following his two reversed-grid GP3 victories last season.

Five seconds separated Shwartzman and Daruvala at the flag, now split by 19 points at the top of the standings, but they were well clear of a manic final-lap fight for fourth.

Title contender Juri Vips had had a quiet race having failed in an earlier bid to get past Tsunoda, but he went three-wide with both Tsunoda and Leonardo Pulcini on the run to Les Combes.

Vips claimed the inside line, with Tsunoda and a charging Christian Lundgaard (who started 14th) both running off track on his outside. Tsunoda came back on across the front of Vips, who continued in fourth ahead of Lundgaard until the Bus Stop chicane, when the Hitech driver locked up under pressure from the ART man and conceded the place.

Tsunoda took sixth ahead of Pulcini and Marcus Armstrong, who came from 19th after a disastrous qualifying to take eighth and reversed-grid pole for race two. ART duo Max Fewtrell and David Beckmann completed the top 10, while Carlin’s Teppei Natori missed his maiden point by just a single place.

Vips was fortunate not to be further back after the first lap, but he benefitted first from contact in front of him at Les Combes between Logan Sargeant and Jake Hughes (which dropped Hughes to the rear and earned Sargeant a penalty) and then from Devlin DeFrancesco and Alex Peroni locking wheels at Bruxelles, after which Peroni went off into the barriers to trigger the VSC.