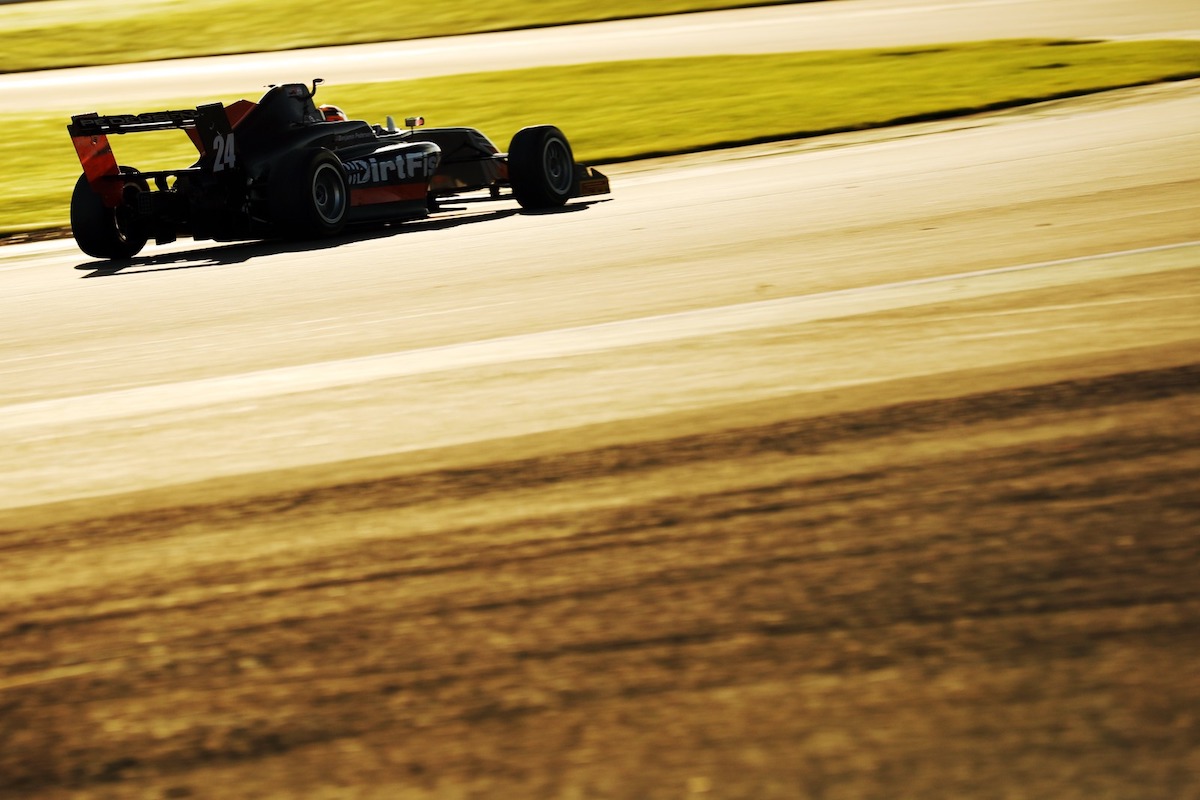 The race was delayed for some 20 minutes due to fog, and the conditions remained grim once it did get going. A decent chunk of the field opted for slicks for the 20-minute race, but the wet tyres initially had a slim advantage.

Douglas Motorsport’s Manaf Hijjawi, also on wets, led the end of the first lap, but Pedersen came through shortly afterwards as the slicks got into a better operating zone.

Both wet-shod, title rivals Kaylen Frederick and Kush Maini gained seven and eight spots respectively on the opening tour. That put them in a pack that had Double R’s Louis Foster make contact with Lanan Racing’s Piers Prior, who subsequently opted to pit for slicks.

As the race progressed, the slicks turned out to be some six to seven seconds a lap quicker than the wet tyres. This limited the progress of the championship contenders massively, and they found themselves battling each other.

Initially, Frederick got past Maini in a three-wide moment with Foster at Chapel, where the slick-shod Double R driver spun onto the grass.

After that, Maini then barged his way back past Frederick. However, Maini’s pace was once again not strong in the wet and he slipped down the order in the closing stages of the race.

Briefly, Frederick was on for the 11th place that would have sealed him the title, only to be passed late-on by Prior.

The result is that the title goes to the wire, but Frederick will only need to finish to clinch the title and become the first American to take a British F3 crown.

Up front, Pedersen found himself under pressure from Carlin’s Nazim Azman for much of the race, while Fortec Motorsport’s Roberto Faria, who started towards the back, progressed on his slicks into the lead battle that also featured Lanan’s Bart Horsten.

Horsten got by Azman for second at Luffield on the final tour, as Pedersen controlled the pressure from behind to take victory.

Hillspeed’s Oliver Clarke wasn’t too far behind Faria in fifth, ahead of Foster, JHR Developments’ Carter Williams and Sasakorn Chaimongkol (Hillspeed) – the last of the slick-shod starters.

After his pitstop, Prior finished ninth ahead of CDR’s Josh Skelton – the first of those who finished the race on wets.

After leading the race early on, Hijjawi finished 14th and Mason finished 19th and last with a time penalty after also pitting for slicks.

Hitech’s Reece Ushijima was disqualified from the first race for contact with former championship contender Ulysse de Pauw and started last in race two as a result. De Pauw finished 13th while Ushijima was 15th.