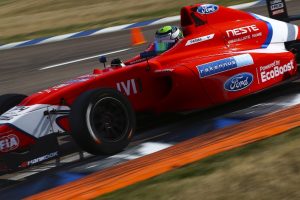 Patrik Pasma took a comfortable first British Formula 4 win at Rockingham in an Arden lockout of the podium.

Pasma’s initial start from pole was good, although it looked like he bogged down a bit in the higher gears, and he led from lights to flag.

He stealthily extended his advantage up front, pulling out a tenth or two on every lap to eventually finish 2.1 seconds ahead.

The battle for fourth was the most intriguing, with championship leader Kiern Jewiss being shuffled down into the position after being overtaken by Hauger at Yentwood on the first lap. Title rival Ayrton Simmons then lunged down the inside of Jewiss at the Tarzan hairpin, and managed to pull off the move cleanly.

Simmons’ move meant a gap was quickly made between the top three and fourth place, with Simmons in turn pulling away from Jewiss.

The Double R Racing driver came under under pressure from Arden’s Seb Priaulx at some points, but caught back onto the rear of Simmons’ JHR Developments car at the end of the race and only finished half a second behind.

Priaulx and Fortec Motorsport’s Johnathan Hoggard were just behind the battle for fourth at the flag, with a significant distance between them and eighth placed man Manuel Sulaiman.

The JHR Developments driver qualified fifth, but dropped out of the top 10 early on. He fought his way back up the order, and is now 10th in the standings. Paavo Tonteri and Josh Skelton completed the points paying positions.

Hampus Ericsson finished a lapped last after making two trips to the pits.