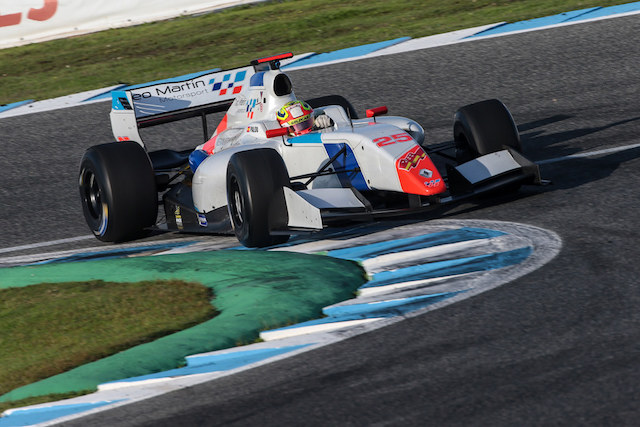 Alex Palou set the best time of a three-day Formula V8 3.5 collective test at Jerez on his first ever day in the car.

The 19-year-old Spaniard, who has competed in GP3 for Campos in the past two seasons, joined Teo Martin Motorsport for the final day of the test and was third quickest in the morning as team-mate?Dorian Boccolacci set a new benchmark of 1m26.714s.

Then in the closing minutes of the entire test, Palou went underneath the Frenchman’s time with?a 1m26.668s.

Three-time 2016 race-winner?Roy Nissany?joined the test on the final day with Lotus and was second to Boccolacci in the morning and third overall.

The form man of late 2016?Egor Orudzhev?also returned on the last?day with Arden and was the fourth and final driver in the 1m26s.

Pietro Fittipaldi has been a frontrunner in tests since his maiden series podium in the final race of 2016, leading an initial?day at Aragon with Fortec and the first day of the two-day Barcelona test with Lotus.

He joined the Jerez test on day two with Lotus and posted the day’s best time of a 1m27.392s, then returned to Fortec for day three and finished up fifth?with his afternoon time of 1m27.099s.

After two seasons with AVF, Alfonso Celis has also tested?with Fortec?since the end of the season and took sixth place?with the British squad on the final day.

Having previously ran with the team 12 months ago before racing in GP3,?Kevin Jorg?has tested with Lotus at Barcelona and on the final two days at Jerez, where he was seventh fastest.

Beitske Visser returned to AVF, her team of 2014-15, and claimed eighth place ahead of former GP3 runner-up?Facu Regalia, who tested with Durango and then RP Motorsport with a view to making a single-seater return, and?Matevos Isaakyan, who partnered?SMP stablemate Orudzhev at Arden.

Testing when times were slower at the start of the week, Euroformula Open racer?Damiano Fioravanti topped the opening day for RP Motorsport ahead of AVF’s?Harrison Scott, who was on his first day in the car.

Max Defourny took fourth on that first day behind Lotus team-mate?Rene Binder?and in front of?Steijn Schothorst, who was then second to Fittipaldi on day two for RP Motorsport.

Yu Kanamaru tested on the first two days for Arden and was fourth on day two behind Fioravanti, with Konstantin Tereschenko fifth after two days with Teo Martin Motorsport.