Palmer wins again as HHC lock out the podium 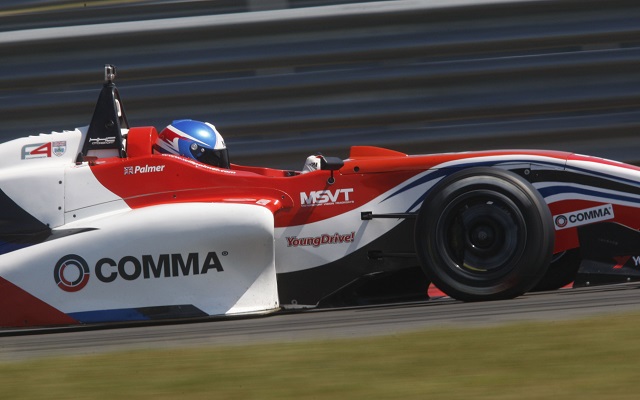 17-year-old William Palmer was at the head of a 1-2-3 finish for HHC Motorsport, picking up his second victory of the BRDC F4 event at Snetterton.

Palmer, who got pole due to setting the fastest lap in the first race, managed a solid start and maintained the lead throughout the entirety of the race distance.

Front row starter Raoul Hyman fell behind Sennan Fielding and race two winner Arjun Maini over the opening lap, which preceded the second safety car period of the weekend. This time, it was SWR’s Diego Borrelli who brought out the yellows.

The race went back to green at the end of lap three and Palmer held on to the lead after the restart. He quickly established a one-second lead over his teammate Fielding and maintained it for the six remaining laps to take the checkered flag in first.

Fielding finished second, while Hyman overtook Maini shortly after the restart to ensure a podium lockout for the HHC team.

The Indian had to settle for fourth, with Gaetano Di Mauro picking up his personal best finish in fifth despite race-long pressure from points leader George Russell.

Russell’s teammate Struan Moore was one spot behind in seventh, while Diego Menchaca, Charlie Eastwood and Gustavo Lima making up the rest of the top ten.