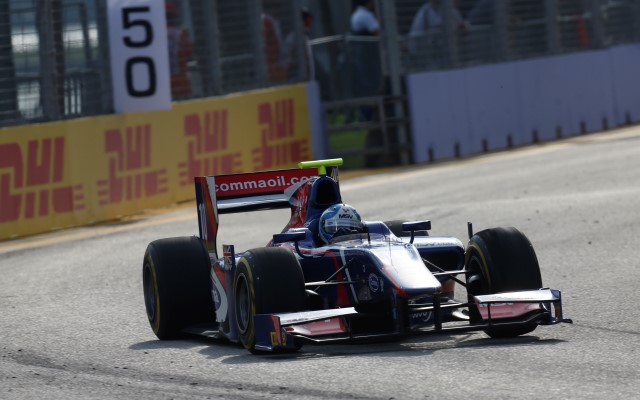 Jolyon Palmer fought back from a poor start to beat Carlin team-mate Felipe Nasr to the feature race victory in Singapore.

Palmer got a bad launch from pole position as Nasr surged into the lead, with the Briton initially slipping to fourth before finding his way back past James Calado and Fabio Leimer.

Nasr had a lead of 13 seconds after he and Palmer had made their pitstops but the Brazilian struggled with his tyre wear in the closing stages as Palmer reduced the gap at more than 1.5 seconds a lap.

Palmer was on Nasr’s tail with four laps to go and Nasr was powerless to prevent his team-mate coming past and denying him his long-awaited maiden GP2 win. Palmer opened up a 13 second gap over the remaining laps before the chequered flag.

Calado overhauled Leimer for third by running longer into the race before changing his tyres. The Swiss driver was back on Calado’s tail late on but was unable to get past and found himself overtaken by Stephane Richelmi before the finish.

Tom Dillmann passed Marcus Ericsson towards the end to take sixth while Sam Bird did his title hopes the world of good by claiming the reverse grid pole position in eighth. After starting tenth he lost places off the start but was able to recover and pass Dani Clos for eighth before the end. Jon Lancaster also passed Clos for ninth.

Leimer has extended his lead over Bird to 12 points but will start fourth on the grid for Sunday’s sprint race.