The fourth year of the relaunched series begins, with a few of the drivers worth keeping an eye on. We work through the grid, from the 15-year-old Swiss ace to the 39-year-old Bulgarian builder…

It’s safe to say that the quality on the FIA Formula Two Championship grid has rather diminished since its re-inception in 2009. Back then, the entry list was led by names like Soucek, Wickens, Aleshin and Bortolotti. The number of promising drivers has decreased year-on-year since then, and 2012 is no different. Amongst the 16 drivers present at Silverstone this weekend there are a few drivers worth keeping tabs on, and also some that aren’t.

Last-year’s runner-up Christopher Zanella returns for a title bid and a shot at the Williams F1 test prize. The Swiss driver was a surprise package early on, taking a double victory at Magny-Cours. His season fell-apart with no podiums in the second half of the year, and as a result it’s quite hard to pin down exactly how good a driver he is, and how well he will do this year. The 2008 Swiss Formula Renault champion, he also showed a bit of promise in F3 Euro Series and Italian F3 before moving onto F2 last year. 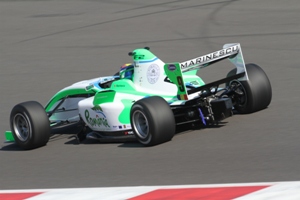 Zanella may be the returning driver who finished highest in last year’s standings, but Mihai Marinescu had much better form at the end of last season. The Romanian, now entering his third season finished fifth overall, with four podiums from the final six races including a victory from pole position at Monza. After encouraging results in Formula Renault in his early career, he made the odd decision to step back to Formula BMW Europe when he should have been making a step up to F3. The following year he went to the opposite extreme, jumping up to Formula Renault 3.5. Unusurprisingly he struggled. Contested the GP2 Final at Abu Dhabi last November, but wasn’t very competitive.

Another returnee we expect to fight at the front is Luciano Bacheta, who started four races at the end of 2011 and scored points in all of them. Runner-up in the Formula Renault Eurocup in 2010 after two previous lacklustre seasons in the series, the Briton moved up to GP3 last year but struggled and left mid-season.

The series newcomer arriving with probably the best record of late is Alex Fontana. The 19-year-old Swiss-Greek driver won the European F3 Open (basically Spanish F3) title last year, but that came after a very poor season in the Italian series the year before (although that was only his second seaosn out of karts, where had good results). He made a one-off appearance in GP3 last year at Spa and finished sixth in his second race. 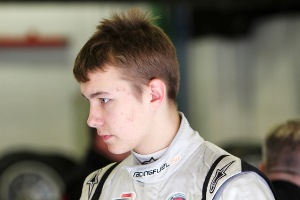 It’s another Swiss driver Matheo Tuscher who is probably the most exciting prospect in the field. Last year he won the Formula Pilota China title with ease in only his first season of car racing, at the age of just 14! Having only turned 15 in December, Tuscher tested F2 and GP3 over the winter, and like Fontana he chose F2 for his 2012 campaign. It’s a decision that could pay dividends for both, with the less competitive field in F2 giving them a greater chance of success. Testing suggests Tuscher won’t quite have the pace to fight for the title this season, but there’s no hurry.

Another debutant who looks set to be a title contender is Markus Pommer. The German driver has had an interesting? record of late, finishing third in his rookie season in his national F3, but only finishing eighth and seventh in subsequent seasons. No race wins in all three years, but having stepped up to F2 he’s looked mighty fast in winter testing and looks as though he could well be hard to beat.

There have been a couple of very last minute additions to the entry list on the eve of the weekend whose records suggest they could well fight at the front immeditaely. The first of those is Italian Samuele Buttarelli, who finished eighth in Auto GP last year with a pair of reverse grid race wins. His record previous to that certainly doesn’t suggest anything special though, so it will be interesting to see how well he goes if he has a full campaign. 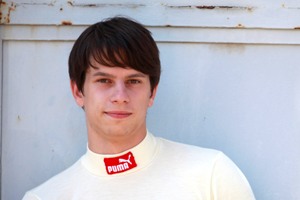 The other late entrant is Kevin Mirocha. He raced in GP2 with Ocean last year and although he scored no points, he impressed on a few occasions early in the season despite his lack of experience. Previously he’d impressed in Formula BMW and German F3 back in 2007-08 before budget issues began to take their toll.

Britain’s Daniel McKenzie takes a slight but wise step backwards after a very tough year in Formula Renault 3.5. in 2011, where he was the only full-time driver not to score any points. He had previously shown some promise by winning the British F3 National Class title in 2009, and then an even more impressive 2010 campaign in the main class where he finished ninth overall and won two races. Testing pace suggests the 23-year-old won’t quite be able to match the leading contenders in F2, but should be firmly inside the top ten.

McKenzie was taken on by Mark Blundell’s management firm over the winter, as was fellow Brit Hector Hurst. Hurst joins Tuscher in jumping up to F2 in only his second year of single-seaters, albeit he is somewhat older at the ripe old age of 20. Last year he raced in Formula Renault BARC, finishing only 13th overall. He’s looked as though he could be slightly higher up the order in F2 though, despite the big step up. 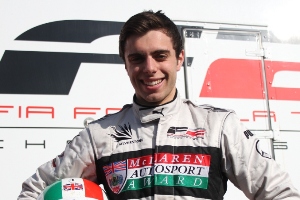 Hurst is one of three Formula Renault BARC graduates. Champion Dino Zamparelli was amongst last year’s McLaren Autosport BRDC Award finalists. Having only got the deal together on the eve of the season it’s difficult to work out how competitive he will be, but he’ll no doubt improve as the season goes on. Iran’s Kourosh Khani also makes the move up, having finished fourth in Formula Renault BARC last year. He was an impressive seventh fastest at the pre-season test.

Iran isn’t the only nation not known for its motorsport heritage represented on this year’s grid, with Zimbabwe’s Axcil Jefferies also poised to line up (to be confirmed). He finished an impressive third overall in his first season of single-seaters in Formula BMW Pacific, but budget constraints brought his 2010 campaign to an early end and causing him to sit out 2011 entirely. He ran inside the top ten in testing.

Another newcomer with experience of racing in Asia is China’s David Zhu. He’s raced in Formula BMW, Formula Asia 2.0, Formula Challenge Japan and Formula Pilota China over the past five years, but all with limited success.

A quarter of the grid are Swiss, with their fourth driver being Mauro Calamia. He came tenth in Formula Renault Alps last year, but has been off the pace in F2 testing.

The grid is completed by three more returning drivers. Spain’s Jose Luis Abadin really struggled last year scoring just one point, despite previously scoring podium finishes in the European F3 Open. 31-year-old Indian Parthiva Sureshwaren begins his third F2 campaign, looking to add to the solitary points finish he scored back in 2010. 39-year-old Plamen Kralev also enters his third season, and with a smaller grid this time around it looks like the Bulgarian construction magnate could add to his two points finishes so far.

Also in action this weekend are Auto GP and British F3

The Auto GP World Series moves onto Marrakech in Morocco for its third race weekend of the season, supporting the World Touring Car Championship as usual. Adrian Quaife-Hobbs arrives with a 21 point advantage at the head of the standings after finishing on the podium in all four of the races so far, winning twice. He’ll also look to continue his pole-position streak that dates back to last year’s GP3 season finale.

Pal Varhaug is the Brit’s nearest challenger in second, but is just five points ahead of Russian teenager Sergey Sirotkin – the revelation of the season so far.

After last weekend’s season opener at Oulton Park, the series moves on to Monza for one of? four scheduled international visits in the ten-round season. Jack Harvey will hope to extend his points lead at a circuit he won at in Formula BMW Europe.

Next Brit rising the ladder with Racing Steps: Jack Harvey