written by Roger Gascoigne 3 May 2022 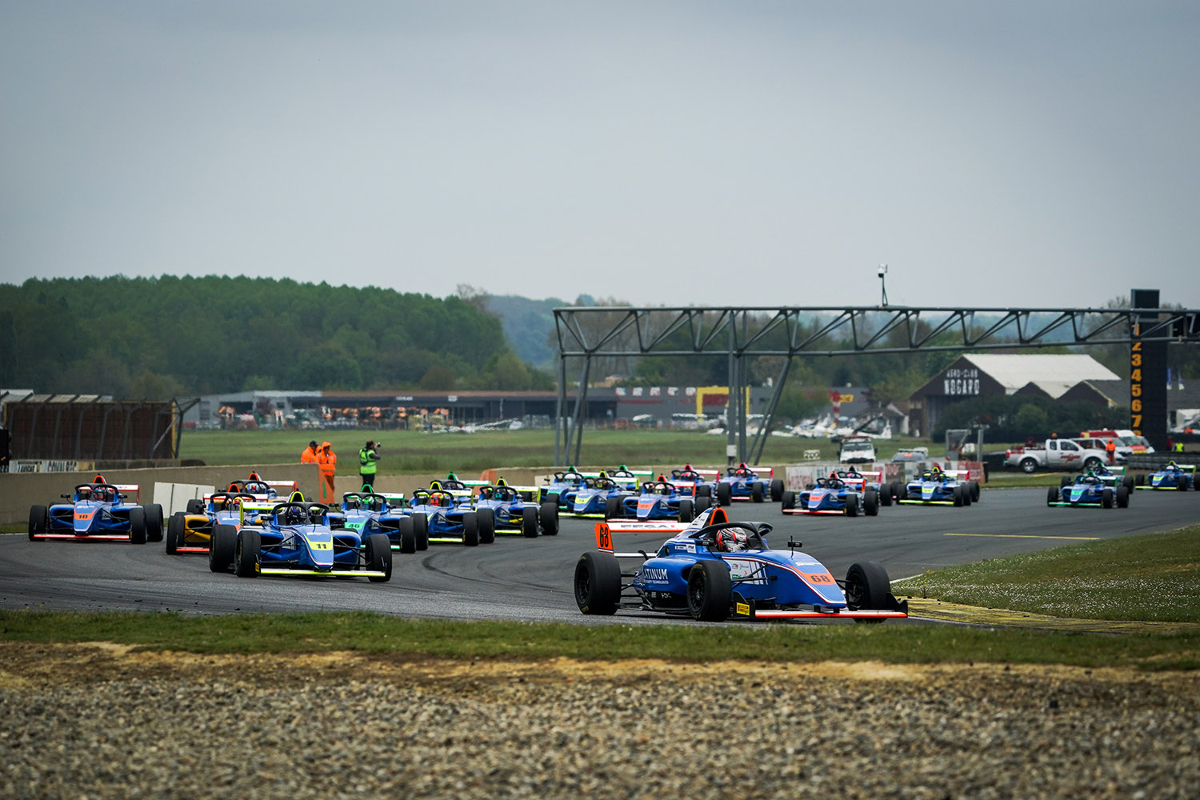 Nogaro’s traditional Easter event welcomed a bumper grid of new Mygale M21-F4s for the French F4 opener. Sophomore Hugh Barter was in dominant form, several rookies made strong impressions and Formula Scout’s Roger Gascoigne was on the ground in Gascony to cast an eye on it all and get the paddock lowdown

With 24 starters from 11 nations, the French F4 championship has started its transition to Gen2 machinery in strong style.

Amaury Richard, sports manager at the FFSA responsible for the championship, told Formula Scout: “It’s good to have the possibility to welcome as many drivers as we have now with a lot of nationalities and with some support from constructors. The more drivers there are, the more they will learn and it will be good for their progress into higher category series.”

One of the main selling points of the French series is lower costs than another championships. German rookie Max Reis, the youngest driver in the field, chose France over his home ADAC championship “because it’s half the price of Germany”.

“[Being centrally run means] as soon as they arrive, they have the opportunity to perform which is the main thing for them,” says Richard of French F4’s distinct operating model. The drivers can only make minor set-up adjustments to the anti-roll bar and the rear wing, meaning “the main set-up is between the seat and the steering wheel”.

Reis agrees: “Everybody is driving the same [car] and we can see the other guys’ data. It’s very cool.” This is unlike ADAC where he says “when a guy has more money than you, he gets the better engine” and adds ruefully, “we don’t have the money”.

The French championship is the only major European F4 series to have remained loyal to Magny-Cours-based constructor Mygale when choosing its second-generation car, and the M21-F4 made its race debut at Nogaro. 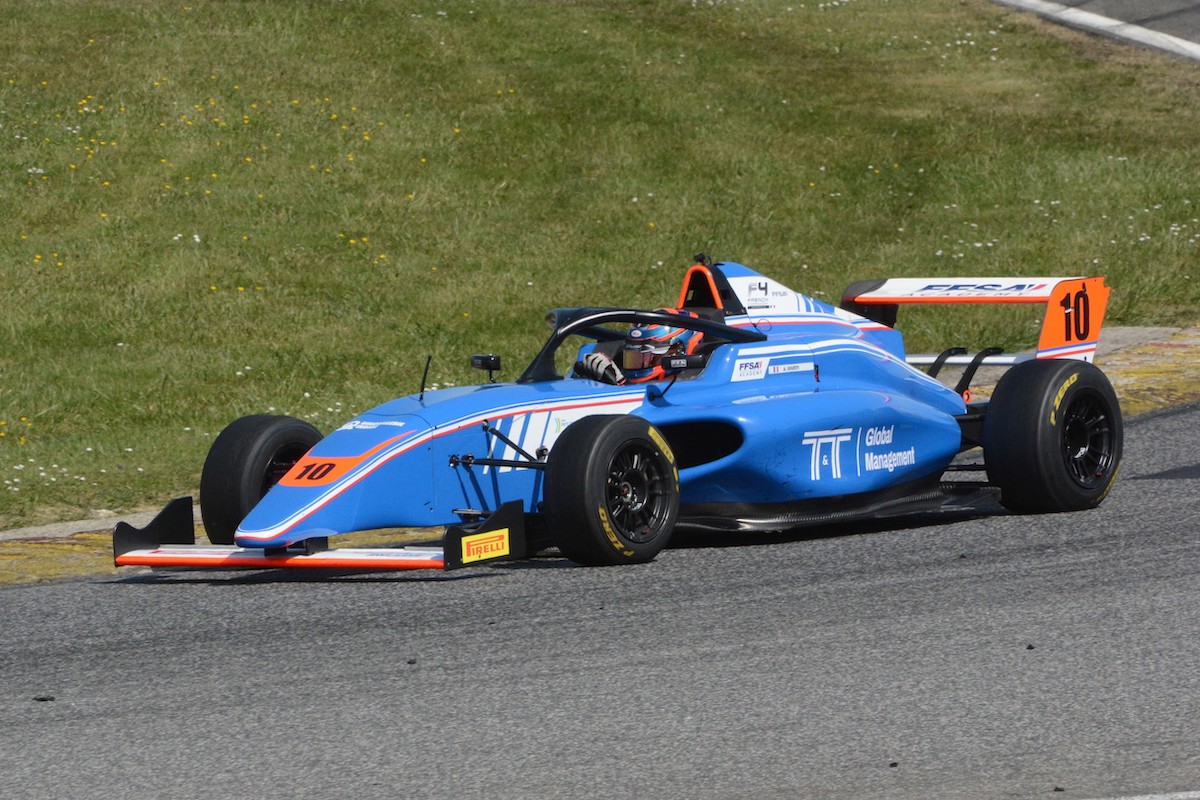 Delays in cars and parts deliveries at rival Tatuus have been well-publicised, with Van Amersfoort Racing withdrawing from the first ADAC F4 round at Spa-Francorchamps citing the lack of preparation time caused by the late arrival of their cars.

Most of the Mygales were delivered to the same place and customer, and Richard is pleased with the car.

“It’s really well finished. We already had six sessions this year and we haven’t had a single car returning to the pits during a session for an issue. We are still, of course, making them more and more reliable, but it is not too bad for a new car. We are quite happy with them.”

Despite the addition of the halo cockpit protection device, the new car is around 40kg lighter than its eight-year-old predecessor. It has the same Renault engine, but a brand new turbo expands the usable range of engine revs.

“Last year we were upshifting really, really low in the revs because the turbo was only working at low revs and now with that bigger one we can go higher in the revs,” explains Richard.

The improvement in performance was not visible at the twisty Nogaro track “but when we go to tracks like Spa and Le Castellet with long straights the turbo makes a big difference”.

Drivers with experience of the previous Mygale M14-F4 noticed little difference. Elliott Vayron, a three-time winner in 2021 as a guest, told Formula Scout: “It’s still a Mygale. It has a bit more speed and the brakes are better, but otherwise it’s the same.”

A field of almost identical blue cars, from a distance resembling a Ligier revival event, made life difficult for commentators and spectators. The drivers only able to put stickers on the sidepods, inside of the rear wing endplates and the front wings.

The cars of the two Red Bull-supported Japanese drivers, Souta Arao and Yuto Nomura, were therefore decked out in the standard royal blue colour scheme with sidepods in Red Bull dark navy but without the brand’s trademark yellow nose. 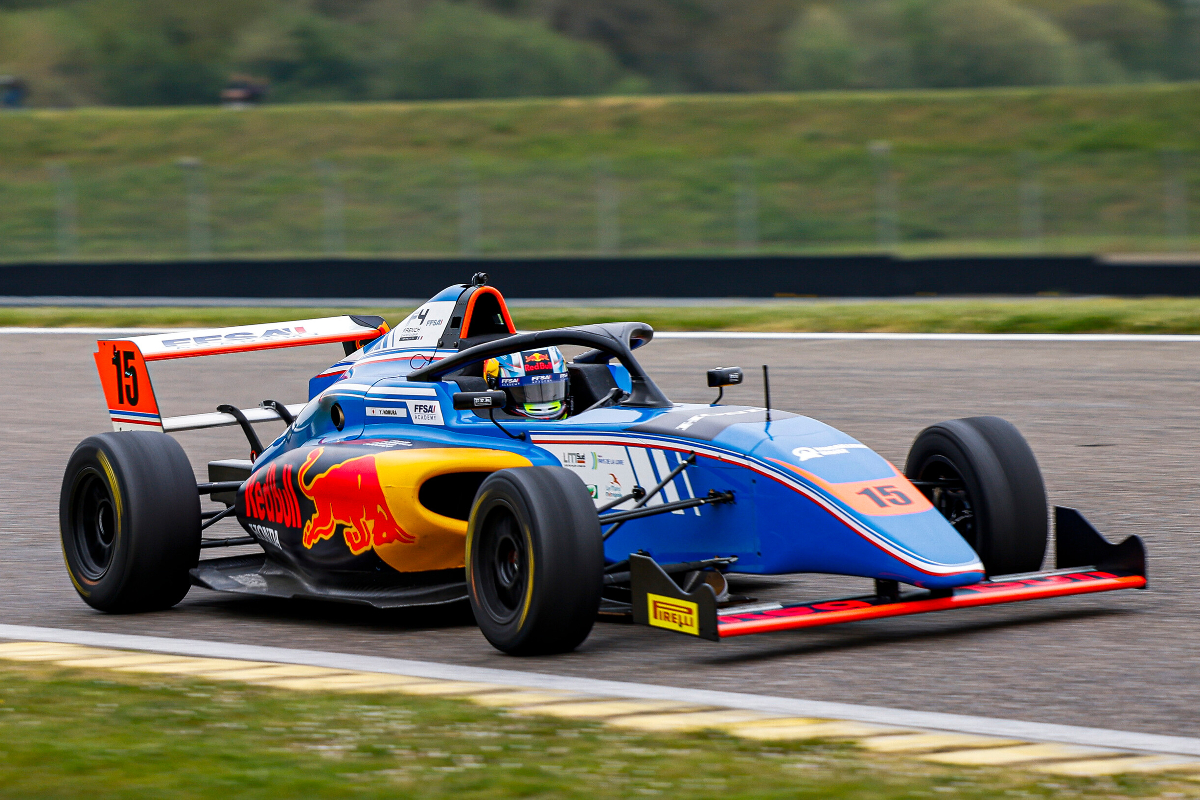 Only Souta Arao’s fastest lap on fresher tyres in race one prevented Australia’s Hugh Barter taking a grand slam of pole, win, fastest lap and leading every lap in both races where the grid was determined by qualifying times.

But Barter’s title challenge needs all the points he can get since he will be ineligible to score at both Spa and Valencia’s Ricardo Tormo circuit as the Spanish F4 championship he is also racing in visits both venues ahead of the French F4 rounds.

“I think it was probably the best weekend we could have asked for, especially being at this track where it’s almost impossible to pass at,” he told Formula Scout after collecting his second winner’s Easter egg of the weekend.

“And to go from P10 to finish P7 [in the reversed-grid second race] was quite good. Overall, considering that we won’t score points in Valencia and Spa, having two wins and small points in race two was really good.”

Ominously for his rivals, he felt that he could have gone three-tenths faster in qualifying. There are, he feels, other areas he can improve on: “It’s something I need to look over after the weekend and just nitpick all the small mistakes and try and improve it for the next one.”

Barter’s expected title rivals Elliott Vayron and Alessandro Giusti had disappointing weekends and left Nogaro fourth and fifth in the standings, 27 and 28 points respectively behind Barter.

Giusti, reigning French F4 Junior champion, had been confident after Friday’s test day but was unable to hook it together in qualifying, limiting him to a third and two sixth places.

Vayron was disconsolate on Sunday afternoon, with a single podium from the weekend. However, he was relieved to be competing at all after being told that the entry list was full when his father missed the deadline to register for the series. 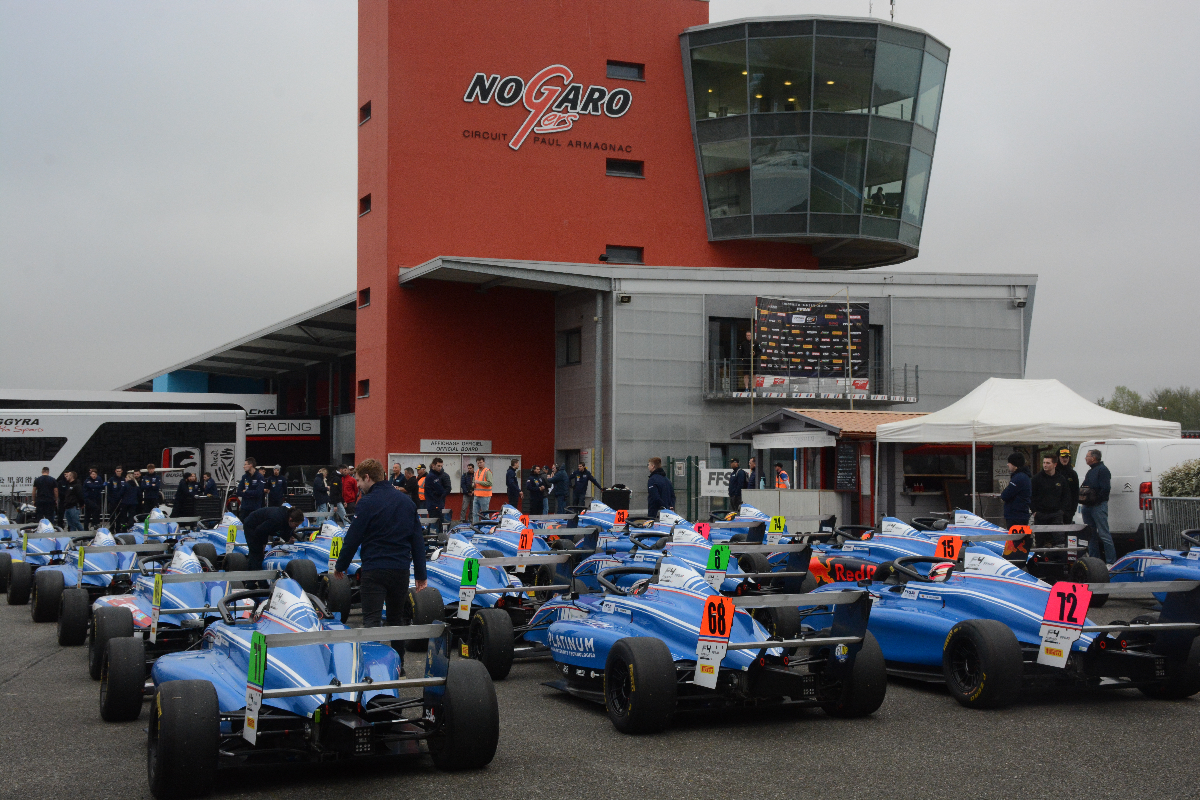 “We didn’t know what to do, [but luckily] they called us back, maybe two or three months later, to say that they had bought new cars, so they’ve got new places and we can participate in the championship.”

The surprise of the weekend was fellow sophomore Pierre-Alexandre Provost, who qualified third and second and turned the latter into a second place in race three. Provost had less than a year of karting before making his F4 debut in 2021, and Barter feels that he “is someone to look out for further down the championship”.

Rookies show flashes of promise but have much to learn

Of the drivers making their debut, the most impressive performances came from Japanese duo Souta Arao and Yuto Nomura who are entirely new to European racing. Nomura won the reversed-grid second race, but Souta was the more impressive and ran Barter close in race one.

The pair, supported by the Red Bull Junior Team and Honda Formula Dream Project, aim to replicate the success of compatriots Ayumu Iwasa and Ren Sato from 2020. Arao wants to follow in Iwasa’s footsteps by taking the French F4 title before moving up to the FIA Formula 3 Championship.

Settling into life in France has not been easy for Honda’s 2022 pair; they both still crave home food, particularly yakiniku, a Japanese barbecue, although apparently they have already developed a taste for croissants and pain au chocolat.

Two other rookies to make a strong impression were Lorens Lecertua and Edgar Pierre.

Lecertua, son of a Belgian mother and Basque father, ran consistently near the front throughout the weekend, finishing all three races in the points, including a podium in the reversed-grid race, on his graduation from karting. 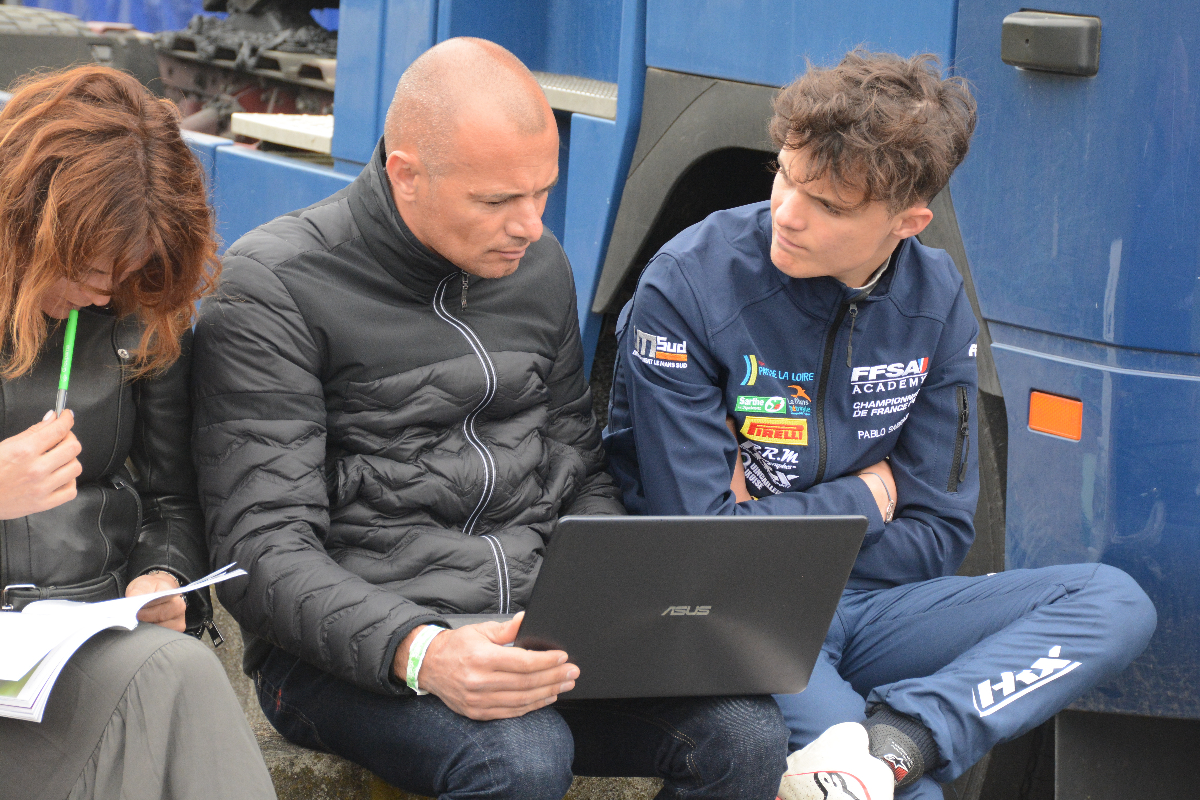 Pierre, managed by Victor Martins’ Victory Lane organisation, had surprised onlookers with his pace in pre-season testing at Le Mans, where he ran “in the top two or three”. An “idiot mistake” in practice limited his track time on the Friday and he was disappointed to be only 11th fastest in qualifying. Nevertheless, he impressed with his charge to sixth in race three.

Pablo Sarrazin returned to the series after making one-off guest appearance in 2021 although endured a difficult weekend with a best result of 12th in race two. Stephane Sarrazin, a winner at Nogaro in Formula 3 and Formula Renault 2.0, was on hand to pass on fatherly advice. “I try, it is not so different now [from my day],” he told Formula Scout.

The two-time Le Mans Series champion believes his son has the same smooth driving style, “a bit too smooth” for the new F4 car. “He needs to be more aggressive, although at the end of the season if he fights in the top five I will be happy.”

Tyre management, particularly important on the high-degradation Nogaro circuit, proved especially tricky for the newcomers, with the decision on when to use the additional half-set of new tyres giving an extra strategic option. Reis admitted to “killing the tyres so I couldn’t drive any fast laps”.

After two years away, the series returns to the streets of Pau for its second round on May 6-8, a highlight of the season.

“Pau is a great venue, really great. It’s really a good atmosphere,” says Richard. “We are really looking forward to going there.”

With a large and competitive field including plenty of rookies, incidents are inevitable within the tight confines of the city. The FFSA is still short of spare parts for the cars, so “we’re hoping not to have too many crashes but that is part of racing”. 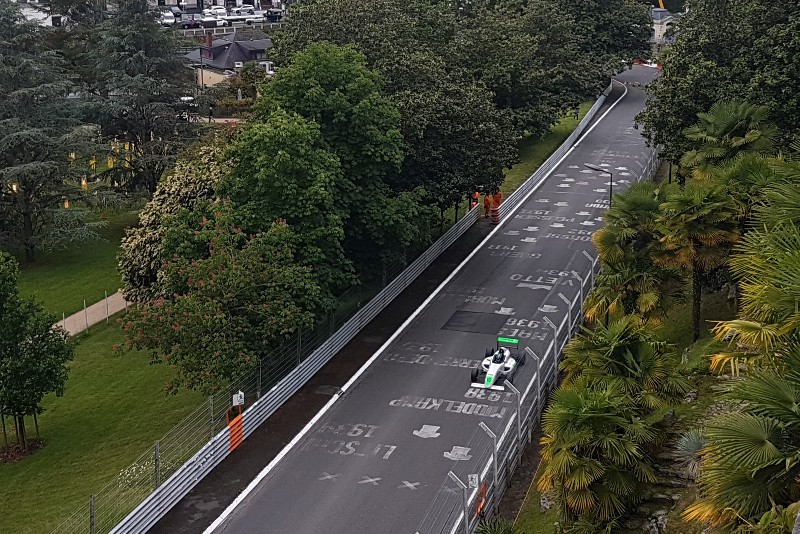 Vayron no doubt speaks for many of his rivals when he says that he is “excited but [also] a bit scared” at the prospect of racing on the unforgiving street circuit. “I’ll do a lot of sim to train but it’s going to be hard,” he said.

Barter is really “looking forward” to the challenge, believing that his experience should give him an advantage. “I’m more excited than nervous in honesty,” he said, adding that “I’ve watched a tonne of onboards [from recent years] because it’s just a nice track to watch. I’ve heard it’s like a mini-Monaco.”

Richard explains the importance of its calendar inclusion: “It’s good for drivers because it’s their first time on a street track, it’s soon in their career, but we could see that in the past a lot of drivers have performed going out of French F4, I think thanks to Pau. Having the opportunity to drive on a city track, even though it’s early in their careers is a really good advantage.”