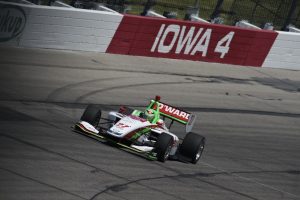 Polesitter O?Ward was unchallenged in the 100-lap race around the Iowa oval, and led every lap to take his fourth win of the season.

After pressuring Urrutia for many laps, Herta finally slipped down the inside of Urrutia with three to go. Urrutia had vaulted from fifth to second early on, but dropped back later in the race as his tyres faded away. He?finished just 0.3s ahead of Andretti?s Ryan Norman, who in turn finished ahead of team-mate Dalton Kellett.

Victor Franzoni, who broke his victory duck last time out at Road America, finished sixth after a race-long battle with Aaron Telitz. Franzoni took the position and the fastest lap of the race.

Despite finishing last, Telitz was just 10 seconds behind winner O?Ward.