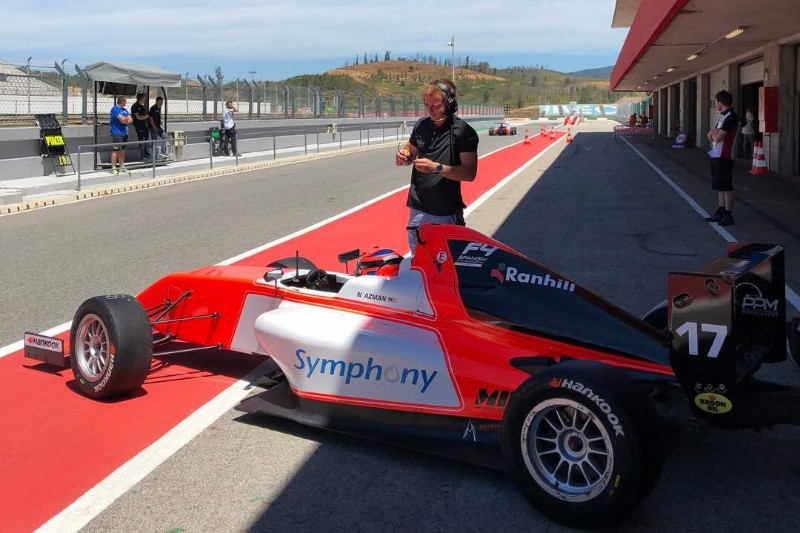 Nazim Azman moved into the lead of the Spanish Formula 4 standings with two podiums at Algarve.

The Malaysian has finished no higher than second this season, but has been on the podium in six of the nine races held so far, and holds a 10 point lead over Javier Gonzalez, who took pole for all three races in Portugal and won two of them.

The only race he didn’t was the first, where he lost his pole advantage at the start and dropped to ninth. He was sixth by the end of the second lap, but could only gain one more place over the remainder of the race.

Petr Ptacek rose from third on the grid to take the lead, and held off Amaury Cordeel for the first two thirds of the race. Cordeel eventually got past, and took a long awaited first win of the season.

Ptacek had no answer to Cordeel’s pace once being overtaken, but held on for second ahead of Azman. Guillem Pujeu finished fourth, retaining the championship lead on win countback from Azman.

Gonzalez looked set to win the second race, having held off Cordeel and Ptacek throughout, before the latter pushed past both in the final two laps of the race to take victory. The stewards decreed Ptacek’s driving standards not up to scratch, and the Czech was handed a three second penalty, dropping him to third.

Having held off Cordeel on the final lap, Gonzalez inherited a win he looked set to get anyway. Azman finished fourth, claiming the championship lead in the process, with Patrick Schott completing the top five.

Gonzalez led from lights to flag in the final race, with Cordeel presenting the greatest challenge until the final lap, when Azman snuck past for second place. Puheu and Rafael Villaneuva finished fourth and fifth.

Pujeu has now sank to fourth in the standings, with Cordeel now in third behind Azman and Gonzalez. Ptacek has dropped from fourth to fifth, despite making the podium twice at Algarve.

Kane Shepherd was the points leader after the first round of the 2018 F4 South East Asia season, but it was the appearance of 2016-17 champion Presley Martono that attracted the most attention.

Martono made a return to the championship in the final round of the 2017-18 season, taking his 10th win, and added an 11th in the third race of the 2018 season opener at Sepang.

Shepherd took pole for the first race of the weekend, and held the lead for several laps until Martono claimed the lead. The 2017-18 MRF Challenge runner-up then lost first position to Alessandro Ghiretti, who was a winner on his championship debut in the 2017-18 season finale three months ago.

Ghiretti ended up being the winner, with Malaysian Muizz Musyaffa taking second ahead of Shepherd, Timothy Yeo and Martono.

The reserved grid second race gave Martono a chance to make up for his race one result, and he led by the end of the first lap. He stretched out a lead of over six seconds, but once again found himself dropping down the order, and ended up finishing the race in fourth.

Ghiretti took the chequered flag in the first place again, ahead of Shepherd and Luke Thompson. A 10-second penalty for jumping the start demoted Ghiretti to sixth though, and handed Shepherd his fifth victory at the Sepang circuit.

Martono moved up to third, with fastest lap to boot, ahead of Yeo and Musyaffa.

In the final race it took a lot longer for Martono to hit the front, but once he did he remained there, winning by seven seconds from Ghiretti. Thompson finished third, ahead of Shepherd and Musyaffa.

The three points for race one pole means Shepherd leads Martono by two points in the standings, with Ghiretti a further two behind.