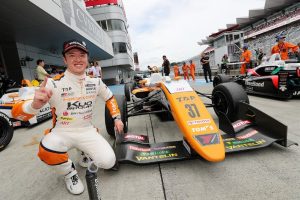 Two-time Japanese Formula 4 champion Ritomo Miyata finally won a Japanese F3 race at Fuji, but it was TOM’s team-mate Sho Tsuboi who collected the most points.

Championship leader Tsuboi took pole for both races, and had an easy start to the first race of the weekend when fellow front row man Yu Kanamaru stalled. Sena Sakaguchi took second at 1st corner.

Sakaguchi pressured Tsuboi for the remainder of the lap, but had no answer to the TOM’S driver’s pace after that and eventually found himself defending from Ukyo Sasahara.

The long pit straight allowed Sasahara to close up to Sakaguchi going into 1st corner, but it was actually later through the lap that he posed the greatest threat. He couldn’t find a way past though, and finished a few tenths behind in third.

Toshiki Oyu finished a lonely fourth after an early tussle, with Kanamaru fighting back up to fifth, 24 seconds off the winner. Shunsuke Kohno completed the points scorers in sixth.

Miyata finished fourth on the road, but was penalised 30 seconds for abusing track limits while overtaking, dropping him to eighth.

This time it was Tsuboi who fluffed his start, dropping right down the order. Sakaguchi snatched the lead on the inside of 1st corner from Oyu, with Miyata shuffling into third. By the end of the lap he had been shuffled down to fifth though, just three places ahead of the charging Tsuboi.

Miyata reclaimed fourth from Yuuki Nemoto at 1st corner, and moved up to third a lap later when Oyu slowed to a stop with a problem.

Kanamaru inherited second, while Tsuboi gained two places thanks to a move on Nemoto, who was sliding down the order. One lap later and Tsuboi was fifth.

Miyata made his move for second down the pit straight, and set off closing down the lead Sakaguchi had built up. On the next lap Tsuboi replicated the move, this time taking Kanamaru and Sasahara at the same time to take third.

The top three were spread out, and it took a long time for Miyata to close in on Honda Formula Dream Project protege Sakaguchi.

Once he did, the drop in pace allowed Tsuboi to also close in, and when Miyata moved into the lead on the run to 1st corner, Tsuboi was close enough to get a slipstream on the next lap.

It took him a further two laps, but Tsuboi eventually claimed second at Coca Cola, by which point Miyata had built up enough of a lead that he was assured of victory.

Sasahara demoted Sakaguchi to fourth, with the front four covered by just under six seconds.

Kohno finished a distant fifth, taking the position from Kanamaru, who had broken his front wing in a late race banging of wheels with Yoshiaka Katayama, who immediately retired.

Tsuboi’s championship lead now stands at 26 points over Miyata, more than the total amount of points available in one weekend.