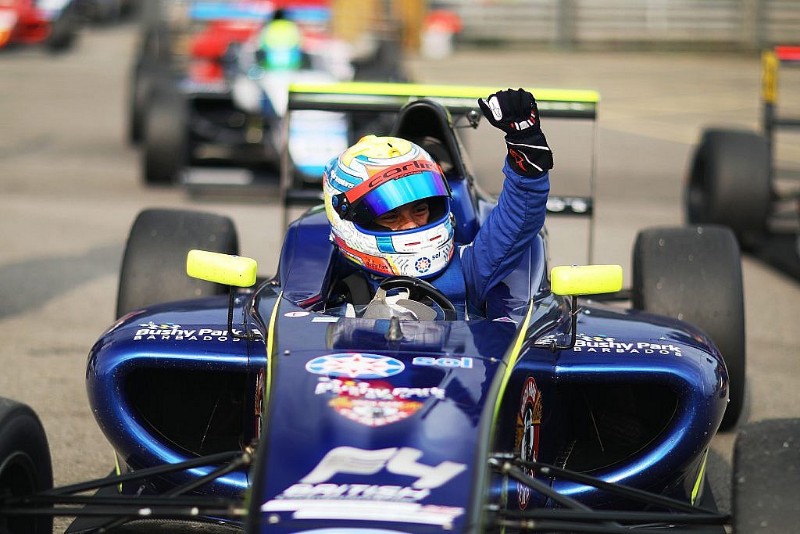 Zane Maloney extended his record-breaking run to seven straight victories by winning the third British Formula 4 race of the weekend at Oulton Park.

As in the first race on Saturday, Carlin?s Maloney had to withstand pressure from Josh Skelton throughout, holding on to win by 0.532 seconds from the JHR Development driver

Maloney led away from pole position before the safety car was deployed after two laps due to a couple of incidents behind.

Chief title rival Louis Foster made up ground at the start from fifth on the grid but, after trying a move around the outside of Carlin?s Joe Turney into Lodge Corner, the two cars touched, sending Turney into the barriers and dropping Foster back down to fifth.

A few corners later there was another incident when Roberto Faria (Fortec) dived down the inside of Tommy Foster (Arden) into the hairpin, but the two cars collided on the corner exit sending both into the barriers.

The race resumed at half-distance with Maloney and Skelton pulling away from the rest until the finish, with Sebastian Alvarez finishing three seconds behind the pair to take the final spot on the podium for Double R Racing.

A spectacular battle developed for fourth in the remaining laps between Richardson Racing?s Luke Browning and Louis Foster. Despite Foster trying many times to get by, Browning held on to beat the Double R Racing driver by just 0.002s at the chequered flag.

Arden Motorsport duo Bart Horsten and Alex Connor made it a four way battle with Browning and Foster in the closing stages, Connor passing his team-mate around the outside of Old Hall Corner to finish sixth.

Horsten finished a further four seconds behind in seventh after damaging his front wing on the penultimate when he tagged the back of Connor, with JHR?s Alex Walker just 0.5s further behind in eighth, his best result of the weekend on his car racing debut.

Mariano Martinez was the sole Fortec finisher in ninth, with Double R?s Reema Juffali scoring a point for 10th.