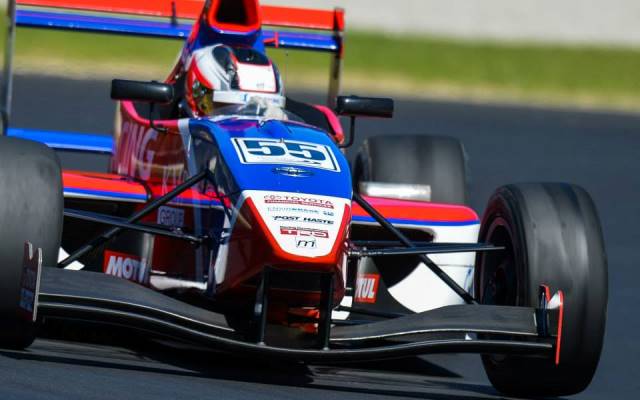 Egor Orudzhev went from fourth to first on the first lap of the second Toyota Racing Series race at Highlands to claim his third win of the campaign.

The Russian led compatriot and front row starter Matevos Isaakyan in the early stages, and would hold onto first place through multiple yellow flag and safety car periods on a wet circuit.

Behind him, the running order changed frequently during the race. James Munro sat third early on ahead of pole-sitter Gustavo Lima, before getting past Isaakyan for second. Lima went on to reclaim second place, only to slip behind Damon Leitch before the finish.

Munro fell to sixth on the final lap, behind Andrew Tang and Levin Amweg. Isaakyan meanwhile failed to complete the final lap.

Robin Hansson finished seventh ahead of Jann Mardenborough, who made early progress into the top ten after starting 16th but found himself falling behind Tang, Amweg and Hansson later on. Matt Rao took ninth, with Martin Rump recovering to tenth and keeping his points lead ahead of Orudzhev. The Estonian had fallen to 14th as he fought over Ryan Tveter for fifth, with the American driver retiring.

Steijn Schothorst‘s difficult campaign continued. He made early progress from 17th on the grid but retired on lap three.

UPDATE: Gustavo Lima has been demoted from P3 to P14 due to a 50-second post-race penalty.