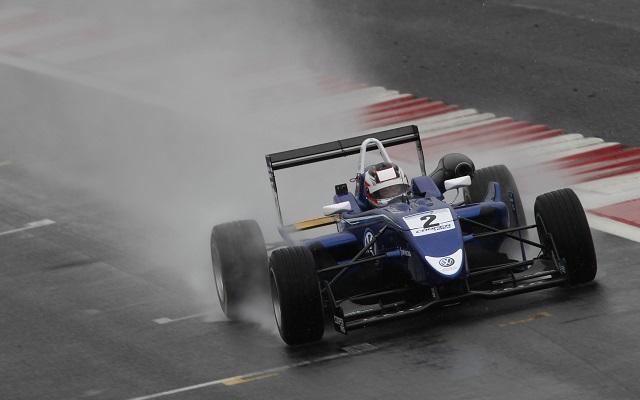 F3 debutant Egor Orudzhev came out on top in a very wet race one of the British F3 round at Silverstone.

Orudzhev mastered the difficult conditions to produce a dominant drive from the front row of the grid.

Due to the heavy downpour which preceded the race, the first few laps were held under the safety car.

Poleman Martin Cao kept the lead when the safety car finally came into the pits at the end of lap three, but immediately came under pressure from Orudzhev. Cao ended up straightlining a corner during the first lap of green flag racing and, while he held on to the lead in spite of his off, he was soon overtaken by the Russian.

From the point on, Orudzhev began to pull away immediately, establishing a five second gap in a lap and a bit. While Cao was trying to find pace in second, third-placed Marvin Kirchhofer ended up getting somewhat close to the Fortec driver, albeit himself kept busy defending from Andy Chang Wing Chung from the beginning of the race.

Chang was close to overtaking the German at several points in the race, but eventually dropped off, settling for fourth place. Meanwhile, Kirchhofer himself could not keep up with Cao and eased off in third.

Out front, Orudzhev had a brief excursion off-track into Brooklands with five minutes to go, but managed to avoid the gravel and hardly lost any time. From that point on, he comfortably cruised to the finish line, securing the first victory of the season for Carlin.

Cao finished second and increased his points lead, while Kirchhofer was another series debutant on the podium in third.