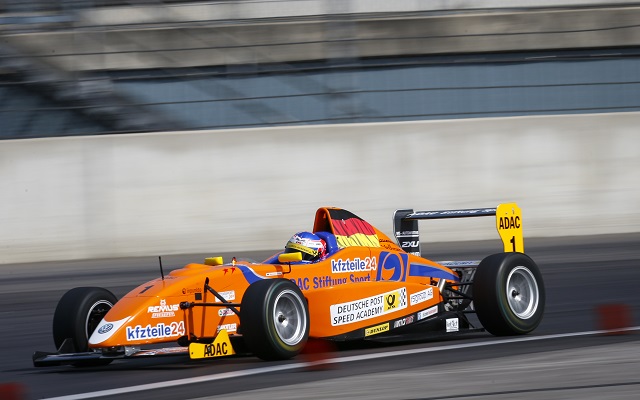 Mucke Motorsport driver Maximilian Gunther took ten points out of Mikkel Jensen‘s championship lead with his third victory of the season in race one at Lausitz.

Gunther lined up on front row alongside teammate Marvin Dienst and managed to get a slightly better getaway off the line. The two were side by side on the main straight with Gunther having the inside line into turn one, from which he duly assumed the lead.

Further back in the field, there was a slight scare when Luis-Enrique Breuer, having started in fourth, went wide out of turn one and slid across the track, being avoided ever so narrowly by other drivers.

While Gunther managed to establish a lead of around two seconds right away, Dienst came under pressure from Jensen for second place.

The top three drivers would be unmatched on sheer pace by anyone else on the grid and, slowly but surely, pulled away from the rest of the pack.

For much of the race, Dienst managed to keep the gap to Gunther at a relatively consistent level, while keeping Jensen behind, as the Neuhauser racer appeared to bide his time.

Out front, Gunther suddenly began to lose pace compared to his rivals in the closing laps of the race, losing several tenths for lap. Both Dienst and Jensen – still running very close by – managed to get close enough to entertain the thought of a fight for victory, but, in the end, it was Gunther who held on, taking the line half a second ahead of Dienst and a full second ahead of Jensen.

In fourth, Kim-Luis Schramm had a calm race from the very opening lap, finishing more than ten seconds behind the leading trio. After Dennis Marschall went off early on, it was Ralph Boschung who took over in fifth, cruising to the end in that finishing position.

Fabian Schiller secured eighth with an overtake on JBR’s Igor Walilko, who then came under pressure from Nico Menzel. The fight between the two rookies ended in contact, as Menzel got loose on the kerb and pushed the Polish driver into the barrier.

As such, it was Tim Zimmermann who inherited ninth in what is proving to be a tech issue-ridden weekend for the rookie. Finally, Breuer managed to recover to tenth, claiming a point on his debut.