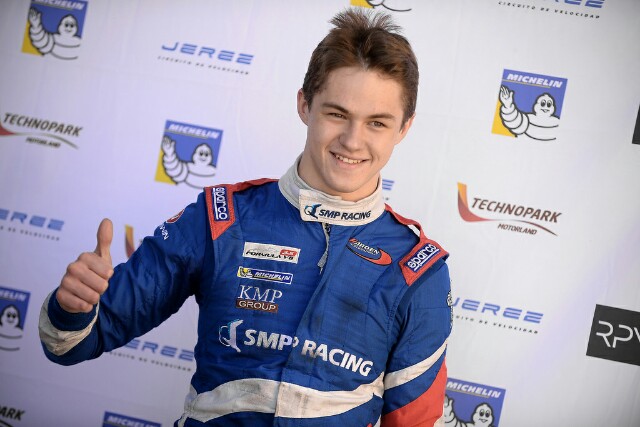 The wretched start to Egor Orudzhev‘s 2016 Formula V8 3.5 campaign has finally turned around, as he took a nail-biting victory by just 0.229 seconds over Tom Dillmann in a frantic race that began with the fastest man in qualifying being stripped of his pole-winning time.

Well before the grid had even formed for this first forty minute race, there was trouble for the SMP Racing team.?Matthieu Vaxiviere was excluded from the Saturday qualifying session, and therefore sent to the rear of the field?- promoting?Aurelien Panis?to the head of the grid, with his Arden teammate Orudzhev alongside.

Then on the formation lap, Vaxiviere’s rookie teammate?Matevos Isaakyan had a bizarre shunt at the Radillon corner – writing his car off as he was due to start sixth.

At the start of the race, it was Panis who then bogged down after what looked to be a decent getaway, dropping to the rear of the field while Orudzhev coasted into the lead.

But Dillmann was?hot on the Russian’s rear wing in just a matter of laps, and soon?Louis Deletraz and?Rene Binder?had caught the leading tandem.

On lap 16, it looked as if Orudzhev had buckled under pressure – after locking up at the Bus Stop the previous lap, it gave Dillmann the chance to take the lead into La Source. But the Russian held his nerve, and re-took the lead using the slipstream down Kemmel Straight to his advantage.

Dillmann would not give up the fight, and Orudzhev had to resist the challenge from the veteran Frenchman all the way through to the final corners of the final lap to secure his first victory of the 2016 season.

Orudzhev, who failed to finish the first three races of the season in succession, takes his third career victory at this level.

Dillmann would settle for second place, but in taking his fifth straight podium finish to open the 2016 season, extends his lead in the drivers’ championship over Deletraz, who came home third – his fifth top-five finish in as many races. In the end, less than a second covered the podium finishers in the final results.

Yu Kanamaru swiped fourth place away from Binder on the last lap, equaling the Japanese’s best finish in Formula V8.

Pietro Fittipaldi was due a solid finish, but he and?Johnny Cecotto Jr.?collided and went off at the Campus complex on the final lap as they contested sixth place.

This promoted Cecotto’s teammate,?Vitor Baptista, to sixth, ahead of?Beitske Visser in seventh – matching her best result of the season. Panis did well to recover from his starting grid woes?to finish in eighth.

The shock points scorer had to be 50-year-old gentleman racer?Giuseppe Cipriani, who took his first points of the season in his Durango car in ninth, one place ahead of?Alfonso Celis Jr. in tenth -?his race also getting off to a bad start on the opening lap.

For his efforts, a late-race mechanical failure kept?Vaxiviere from getting back into the points?- and he retired four laps short of the finish after running as high as sixth.