On the reserves bench: Luiz Razia

Luiz Razia has held reserve driver roles at Virgin Racing and now Team Lotus thanks to his backing, but his GP2 results haven’t backed up such a role just yet…

Luiz began competing in autocross in his native Brazil before switching to karts. His first steps in single-seaters came in Formula Renault and Formula 3 in 2005. He finished tenth in the Formula Renault 2.0 Brazil standings, while in South American F3 he won two races on his way to sixth overall. He remained in F3 for another year in 2006, taking seven wins from 16 races on his way to the title. 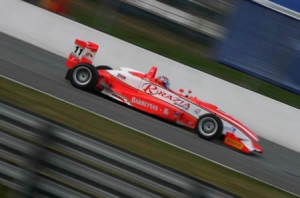 Luiz began his career well in F3, winning the South American title in his second year of single-seaters. Photo: luizrazia.com

He made his first appearance in Europe at the end of the year, contesting the final round of the International F3000 Master series (which would become International Formula Master the following season) at Estoril. He shone by winning all three races that were held at the Portuguese circuit.

Luiz’s performances at Estoril led to him racing in the Euroseries 3000 championship in 2007. He contested the first half of the year for Fisichella Motor Sport, before switching to ELK Motorsport for the second half. Overall he scored four podiums and came third in the final standings. He remained in the series in 2008, winning twice and finishing fourth in the points. 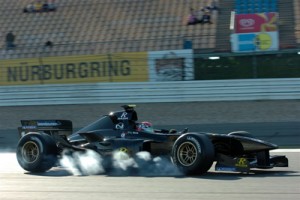 Luiz during the first of his two full seasons in Euroseries 3000. Photo: luizrazia.com

Luiz moved into GP2 at the end of 2008, contesting the 2008-09 Asia series for Arden. He won the final race of the campaign in Bahrain after starting from pole position courtesy of the reverse grid system. He made a return to Fisichella Motor Sport for the 2009 main series, the team changing hands and becoming Coloni later that year. He scored his first points finish in the first race at Monza in September, before the second race after starting from pole.

Luiz switched to the Rapax team for 2010, and began the season strongly. He scored points in all of the first six races, including two second places in the sprint races at Barcelona and Istanbul. He then failed to score again until the final round in Abu Dhabi, picking up another sprint race second place. Meanwhile, his teammate Pastor Maldonado won the championship.

Luiz served as the test and reserve driver for the new Virgin Racing team in 2010, but switched to a third driver role at Team Lotus in 2011 after signing with the Norfolk squad’s sister GP2 team AirAsia. He drove for the team in Friday practice at the Chinese Grand Prix. 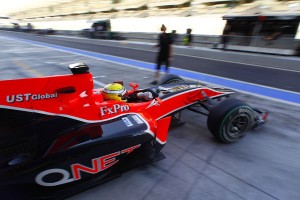 Luiz got a run out at the Abu Dhabi Young Driver Test during his time as Virgin's reserve. Photo: luizrazia.com

In GP2 with AirAsia he scored another of his customary sprint race second places at Valencia, before scoring his maiden pole position in the series at the Hungaroring. He was unable to convert that into a win, but still finished on the podium in third.

Talent rating: Luiz showed well in F3 early in his career and was strong as well upon moving into F3000 in Europe. His time in GP2 hasn’t gone so well, particularly at Rapax last year where he was well beaten by teammate Maldonado. He did prove with his pole in Hungary though that he can be very quick on occasions. 6/10

Chances of getting to F1: Having bought his way into reserve roles at both Virgin and now Lotus, Luiz has certainly put his foot in the door and has also racked up some mileage. His GP2 performances aren’t warranting a promotion just yet, but at 22 and with the backing he has, he’s got a few years to put that right. 7/10 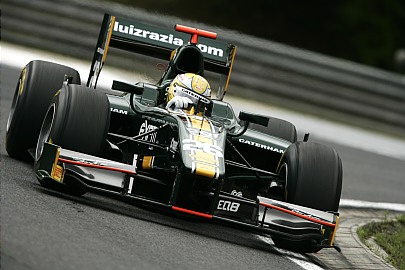