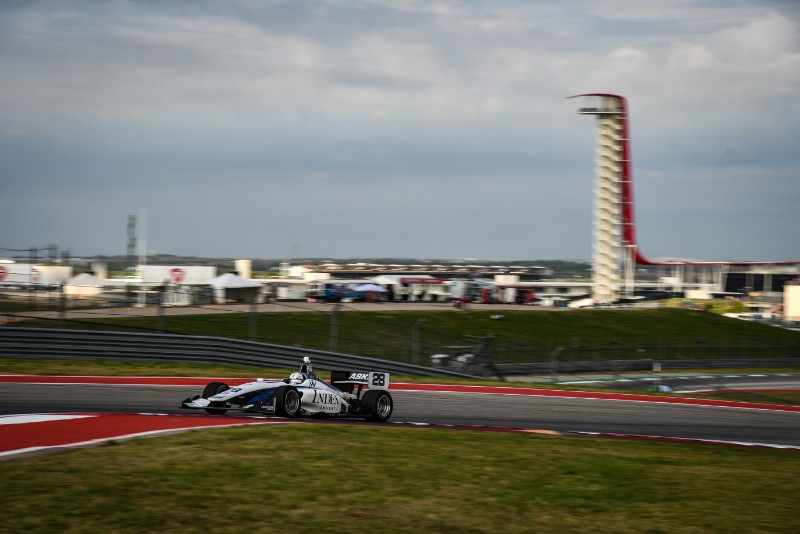 Oliver Askew beat Andretti Autosport team-mate Robert Megennis at the Circuit of the Americas to take his second successive Indy Lights win and the championship lead.

Askew started the weekend?s second race from pole position but was jumped by Megennis into the first turn. From there, he hounded his team-mate in the early stages.

Megennis locked up a tyre on the fifth lap, before conceding the lead a lap later. He initially stayed within 1.5 seconds of Askew, the gap needed to use push-to-pass, before the leader starting replicating his race one pace.

A lifeline came for Megennis in form of a caution period when Zachary Claman DeMelo’s Belardi Auto Racing car came to a halt due to an engine problem and left the top two with four laps to fight for the win.

Askew controlled the restart, and quickly pulled out a gap from Megennis, who was having to defend from BN Racing’s David Malukas.

Malukas started last after failing a post-qualifying inspection and worked his way up through the field. On the restart, he jumped BN team-mate Toby Sowery, who had held the final podium position for much of the race.

Sowery started sixth but made a superb start to vault into third, eventually came home where he started, after dropping positions late in the race for the second time in a row.

Former championship leader Rinus VeeKay salvaged fourth after struggling early on, a repeat of what occurred in the previous race. After running as low as seventh, he made moves on Andretti?s Ryan Norman and then Sowery to limit the damage to a six point deficit to Askew.

After DeMelo’s retirement, Julien Falchero ended up as the lead Belardi driver in fifth, ahead of Sowery and VeeKay’s Juncos Racing team-mate Dalton Kellett, who made contact with Norman and Lucas Kohl in the closing laps.