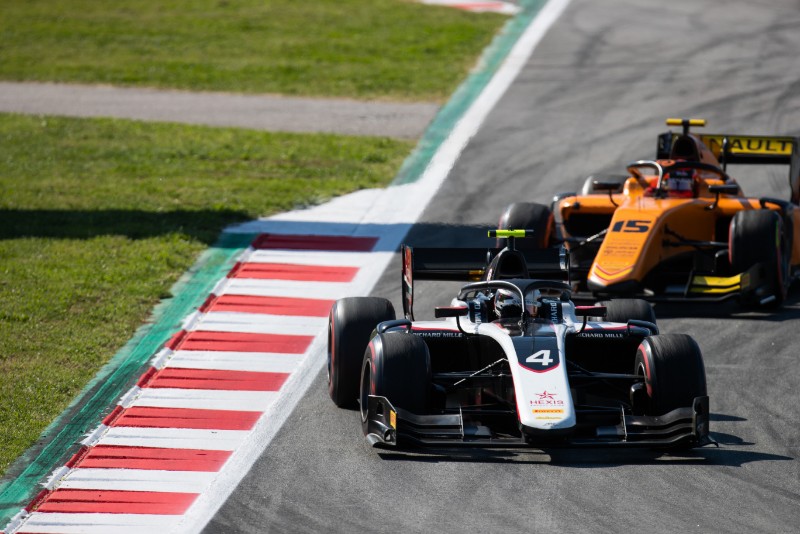 ART Grand Prix’s Nyck de Vries seized his first win of the 2019 Formula 2 season with a comfortable victory in the sprint race at Barcelona.

From third and fourth on the grid respectively, Arden’s Anthoine Hubert and de Vries vaulted ahead of the front row occupants scything between Callum Ilott and Jordan King in the first meters of the 26-lap race.

Renault junior Hubert successfully defended the lead for several laps following an early safety car restart, however, de Vries continued to threaten. With the use of DRS on lap 8, de Vries grabbed the inside line into Turn 1 and took a lead he did not relinquish.

On the same lap, Virtuosi Racing’s Luca Ghiotto began a charge through the order. After slipping from fifth on the grid to seventh by the end of lap one, Ghiotto fought hard to clear Campos Racing’s Jack Aitken and grab sixth place.

Diving to the inside of Aitken at Turn 5, Ghiotto made wheel to sidepod contact when squeezing the Campos on corner exit before completing the move on the brakes into Turn 7.

The Italian then worked his way up to third place before hunting down Ferrari young driver Ilott in the closing stages. On the final lap, he danced around the outside of the rookie at Turn 1 to clinch second place. Ilott settled for a first F2 podium in third.

On the back of his first podium visit in the feature race, Guan Yu Zhou capped a consistent weekend with a fourth place finish ahead of Hubert, who gradually slipped down the order as the race progressed.

Championship leader Nicholas Latifi was quiet in the opening stages of the race in ninth place, despite the scintillating pace which propelled him to feature race victory. However, as the race developed, Latifi’s pace improved and he set the fastest lap en route to sixth.

His surge included a battle with Aitken and King in which he profited when Aitken attempted a move around the outside of the MP Motorsport driver at Turn 1. Aitken was eased off track by King, and Latifi was able to sneak through before dispatching King to grab sixth place later on in the lap.

Aitken was involved in drama again on the final lap. Prema’s Mick Schumacher attempted to swoop around the outside at Turn 1, only to tag Aitken and use the run-off. Having not rejoined to the left of the Turn 2 bollard as required, he was penalised and dropped from eighth to 12th.

The race’s only safety car was deployed when Nobuharu Matsushita’s Carlin car caught fire on the opening lap. He escaped the dramatic blaze unscathed.