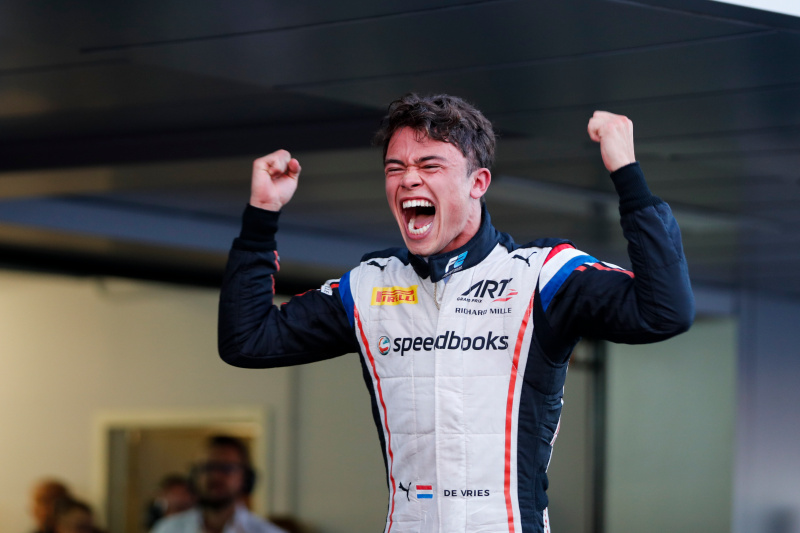 De Vries needed to have a 66-point gap to second place Nicholas Latifi to secure the title, with victory assuring him of that gap.

He made a good start which allowed him to build a gap during the opening few laps.

The Dutchman, who was recently announced as a Mercedes Formula E driver, started the race on the super soft tyres and pitted on lap seven to take on the medium tyres.

He managed his tyres in the middle part of the race, allowing him to keep a gap after Virtuosi?s Luca Ghiotto pitted on lap 24 of the 28-lap race.

Ghiotto was the highest-placed driver who had tried the alternate strategy, starting on the medium tyres, and looked like he was going to finish on the podium in third place.

However, on the last lap, Carlin?s Louis Deletraz made a last-lap pass on Ghiotto into the Turn 13 chicane after the DRS zone.

Ghiotto ran on the medium tyres for 24 laps and came out of the pits in fourth place, behind de Vries, Latifi and Deletraz.

He was able to get past Deletraz briefly and challenged Latifi for second, but lost grip from his tyres in the latter stages of the race ? although Ghiotto did claim the two bonus points for setting the fastest lap of the race.

Matshushita had also tried the alternate strategy in the race, pitting a lap earlier than Ghiotto did on his way to sixth place.

Campos Racing?s Jack Aitken was seventh, as he beat ART?s Nikita Mazepin by a second with the Russian driver finishing eighth on home soil.