The FIA Institute has selected the drivers that will take part in its Young Driver Excellence Academy in 2012, with the likes of Lewis Williamson, Ramon Pineiro and Alex Lynn all included…

The drivers come from a wide range of disciplines and nations – with nine young single-seater stars making the grade. In alphabetical order these are…

20-year-old Austrian Bachler finished third in this year’s German F3 Cup, with race wins at the Sachsenring and Assen. His single-seater career got off to a good start when he won the Formula BMW-based Formula Lista series in 2007.? For the following two years he competed in ADAC Formel Masters, coming third in the standings in both years.

21-year-old Italian Caldarelli began 2011 racing in the GP2 Asia Series, before starting to race in GP3, where he lay second in the standings after the first two rounds. He then left the series to take up a drive in Formula Nippon supported by his long-term backers Toyota, though he failed to score any points from his campaign in Japan. After starting his career in Formula Azzura he spent three years in Formula Renault, culminating with third-place finishes in the Eurocup and West European Cup in 2008. He also tested Toyota’s F1 car that year. In 2009 he raced in the F3 Euro Series, before coming third in Italian F3 last year. This earnt him another F1 test – this time with Ferrari.

18-year-old Colombian Chaves raced in GP3 in 2011, finishing 19th overall with three top six finishes – one in Barcelona and two in Valencia. After completing the noted Skip Barber Racing School in America, Chaves competed in Formula BMW, winning the Americas title in 2009. He made the switch to Europe for 2010, racing in Italian F3.

21-year-old Dane Christensen has raced in GP3 for the past two years, scoring two podium finishes on his way to 11th in the standings in 2011. Prior to that he raced in Formula BMW Europe in 2008 and 2009. After coming sixth overall in his rookie year he ended up fourth in the second, but lost five race results including three wins after his team lost an appeal against a suspension for breaking technical regulations.

19-year-old Australian Le Brocq has had two seasons of car racing, both in Formula Ford in his home nation. This year he finished runner-up in the series, with four races wins. In 2012 he will follow in the footsteps of fellow Aussies such as Mark Webber by going to race in the British Formula Ford Championship. 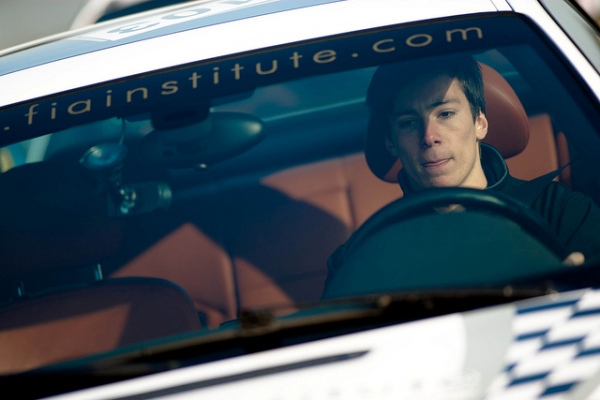 Alex Lynn behind the wheel during this week's selection event. Photo: FIA Institute

20-year-old American driver Lewis this year finished runner-up in the Italian F3 Championship as top rookie, earning himself a test with Ferrari which he undertook this week. Prior to F3 he spent two years racing in Formula BMW. In the first he came fourth in the Americas series, before making the switch to Europe in 2010 where he finished 14th overall.

18-year-old Briton Lynn dominated this year’s Formula Renault UK season, his second in the category. In 2010 he came tenth overall and won the Graduate Cup in his first year out of karting. He then won the championship’s Winter Series. Next year he will move up to British F3.

19-year-old Spaniard Pineiro finished third in the FIA Formula Two Championship in 2011,? scoring three back-to-back wins in the second half of the season. He began his career with two years in Formula BMW in 2008 and 2009, before making the switch to Formula Palmer Audi, where he finished third overall in 2010.

21-year-old Scot Williamson raced in GP3 in 2011, finishing eighth overall with the clear highlight being a victory on home soil on the morning of the British Grand Prix. He has attracted support from Red Bull, for whom he has been doing simulator work for. After finishing runner-up in Formula Renault UK last year he won the McLaren Autosport BRDC Award – getting a test for McLaren which he completed last week.

A video from the selection event can be seen below: