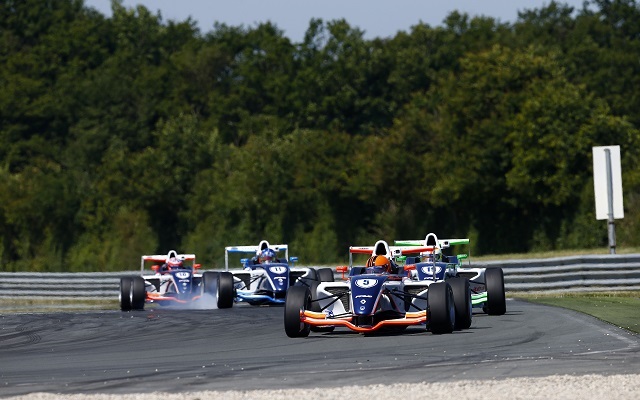 The FFSA-run French F4 champioship has seen the addition of nine more drivers to the 2014 roster, bringing the total tally of those signed on to 19 following a similar announcement earlier this month.

Among those presented in the second wave of confirmations is Swedish karting graduate Reuben Kressner, who finished third in the Swedish KF2 championship last year and has previously tested Formula BMW and FR2.0 machinery. Joining him is compatriot Paul Hokfelt, Jr., who achieved solid results on his two appearances in the series in 2013.

14-year-old Swiss karting graduate Gjergj Haxhiu will be making his single-seater debut in French F4, having amassed a brilliant CV in national-level karting which includes, among numerous other achievements, two Swiss Karting Championship titles in the KF3 class and one in the Supermini class. Another Swiss racer entering the category is David Droux, who graduated from the 2013 edition of the Formula BMW Talent Cup.

Russian programme SMP Racing will continue to have a presence in the series as karting graduate Vladimir Atoev will join the championship in 2014. Atoev won the Russian Karting Championship in the Supermini class in 2009 and finished runner-up in the KF3 class in 2011. On the international arena, he’s most notably secured sixth in the WSK Final Cup in 2012. He’s joined by fellow Russian karting graduate Denis Bulatov, who won the 2013 Russian Karting Cup in the KF2 class and also finished eighth in the same year’s Euro Wintercup.