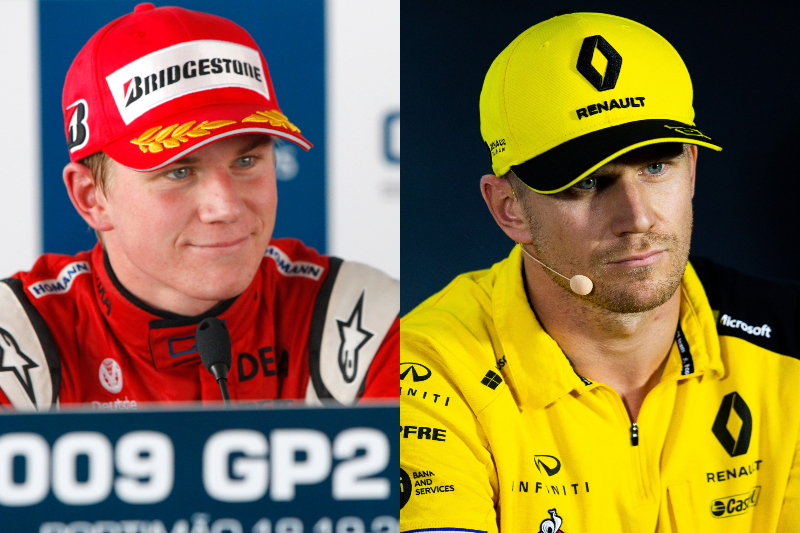 September 13 marks exactly a decade since a young Nico Hulkenberg won the 2009 GP2 title at Monza with a round to spare. As of present, that same driver looks like he may be without a Formula 1 seat for 2020 after 10 years of unrealised potential.

At the time of his GP2 success, Hulkenberg was being compared to Michael Schumacher by their mutual manager Willi Weber and being praised by the Williams F1 team for his work on its shop floor. He was also the team’s test driver, and after meeting its demands of winning back-to-back titles in Formula 3 Euro Series and GP2, he was rewarded with a 2010 F1 drive.

Hulkenberg’s dominant 2008 F3 campaign took place with Frederic Vasseur’s ART Grand Prix squad, who he remained with for GP2. As a warm-up, the German contested two rounds of the winter GP2 Asia series, and immediately made an impact.

He took pole on his Bahrain debut over drivers already well-versed in GP2, and led the first third of the race. Shortly after being passed he pitted early, a strategic misstep that then threw him way out of victory contention with a bad wheel change.

In the reversed grid race he lost a podium on the final lap, but he applied what he’d learnt on his Qatar return three weeks later.

Held under floodlights, Hulkenberg took a convincing pole, then showed how quickly he’d learned GP2’s tyres by making his first stint last an unmatchable 29 of the 34 laps. Admittedly he had lost the lead at the start and his tyre life was helped by an early safety car, but stretching a 45-second advantage while others struggled for grip more than made an impact.

GP2 Asia used the previous generation car, and Hulkenberg actually struggled to adapt to the newer Dallara GP2/08, and how it used the soft tyres. A hugely experienced field made this early struggle obvious, and he failed to score in the season opener. Consistent top five finishes thereon were still below expectations, until a charge to third in the Silverstone feature race. 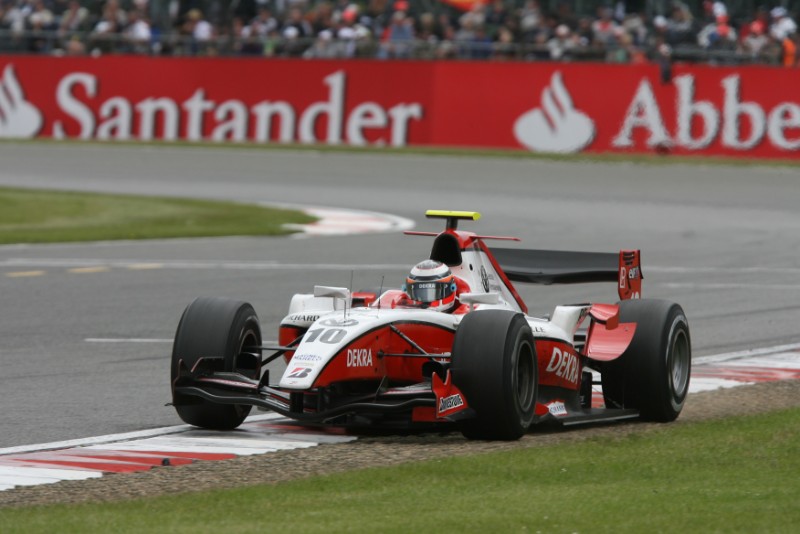 A breakthrough came at his home Nurburgring round, where he became only the second GP2 driver to take pole, both wins and fastest laps in a weekend. Victory at the Hungaroring extended his winning run to a tally last bettered in F1’s primary feeder series in 1991.

Rather forebodingly, only one of those to have bettered Hulkenberg’s tally went on to finish on a F1 podium.

He was 0.396 seconds away from another double win in Valencia, hassled the feature race winner at Spa-Francorchamps, and secured the title with third in the Monza sprint race. The season ended with a fifth win at Algarve in Portugal.

Confirmation of Hulkenberg’s F1 promotion came in November. One year and two weeks later, he was already out of a seat… 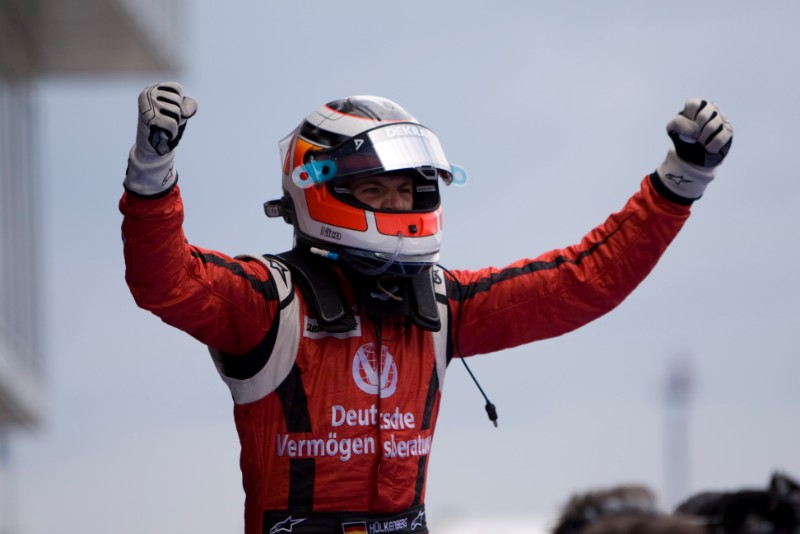 While Hulkenberg didn’t mark himself out on his grand prix debut, spinning unaided on the third lap, he had a top five start by his third attempt and would have scored more than a solitary first point at Sepang were it not for technical issues.

A repeat of that issue meant he started last in Monaco, and front wing failure led to a heavy crash in the tunnel on lap one. While he has had crashes of greater magnitude since, losing his front wing down the Hungaroring pit straight in 2015 being the most obvious, costly errors of judgement were infrequent when Force India brought Hulkenberg back into F1 in 2012.

It was in that first season back that he also claimed the joint best result of his career, fourth at the Belgian GP, and became a legitimate contender for victory in changing conditions in Brazil. Some already considered him one of F1’s best in the wet, and this wasn’t just about keeping the car pointing the right way. On this occasion, and several times since, Hulkenberg’s feel for tyres and ability to read conditions has meant he’s been on the right side of strategic calls when the weather changes suddenly.

Thinking back to Brazil 2012, the win was really taken out of his hands by a safety car that wiped a large advantage he and McLaren’s Jenson Button had accrued. Hulkenberg had beaten Button, F1’s predominant rain expert, in a wheel-to-wheel battle and managed his tyre life perfectly.

The safety car restart was handled with style, and Hulkenberg leaned on his sensitive slick Pirelli rubber more efficiently than those behind to be a comfortable leader in the dry, despite his Force India clearly not being the quickest car. One small error allowed Lewis Hamilton through in the superior McLaren, but Hulkenberg fought back and on lap 55 of 71 went for a move. 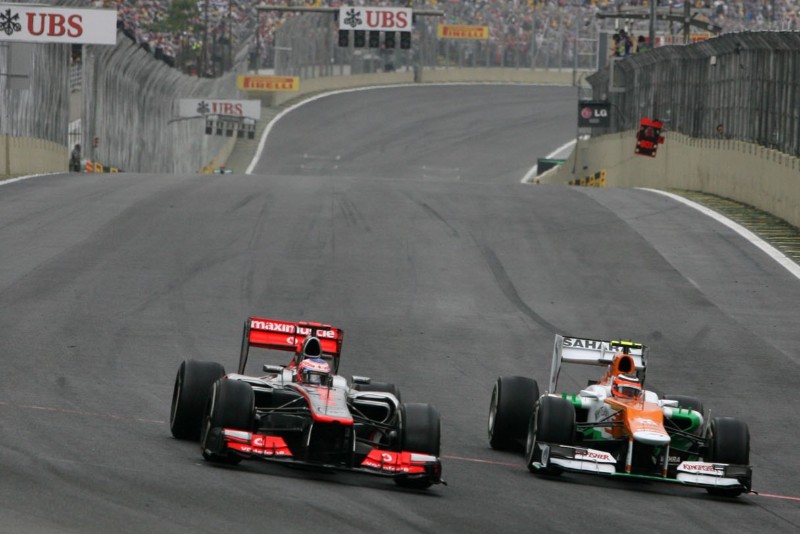 After pressuring Hamilton into a rare lock-up into Turn 1, Hulkenberg picked the inside line. A lapped car directly in front meant he had to take a tighter line, but he braked on a wet patch and slid into Hamilton. While off-track only Button passed, such was Hulkenberg’s remarkable pace up to that point, and he still could have contended for victory until serving a drive-through penalty for the clash, dropping him to fifth.

For three-quarters of one of the trickiest grand prix in a long time he had been odds on to win, and only once since in F1’s current turbo hybrid era has a driver outside of Mercedes, Red Bull Racing and Ferrari been in genuine victory contention.

With this statistic in mind, it’s easy to argue F1 has wasted a decade on a driver who would have been comfortable in a race-winning outfit, and who likely would’ve become a more-rounded racer if he’d put in a top car straight away.

It’s comfort that has mostly held back those ambitions though, with Hulkenberg’s 184cm height always being raised (in conversation) when rumours of a move to a larger team arise.

A performance clause in his Force India contract meant he joined Sauber in 2013, with whom he qualified third for the Italian GP and finished fourth in Korea. His Ferrari-powered performance in front of the Tifosi came at the height of negotiations with the Scuderia, but Kimi Raikkonen’s availability meant Hulkenberg’s unsigned contract was very quickly dead in the water.

Hulkenberg then started chasing Raikkonen’s vacant Lotus seat for 2014, but the realisation that the turbo hybrid engines would be heavier than expected lessened the German’s appeal. Had Hulkenberg said yes to an offer from Lotus for the final two 2013 races, his chances of signing for the next year may have been very different.

Six seasons with Force India (again) and Renault have bolstered Hulkenberg’s midfield reputation and shown his team-building abilities, and being 32 shouldn’t be a worry given Mark Webber became a grand prix winner at the same age. 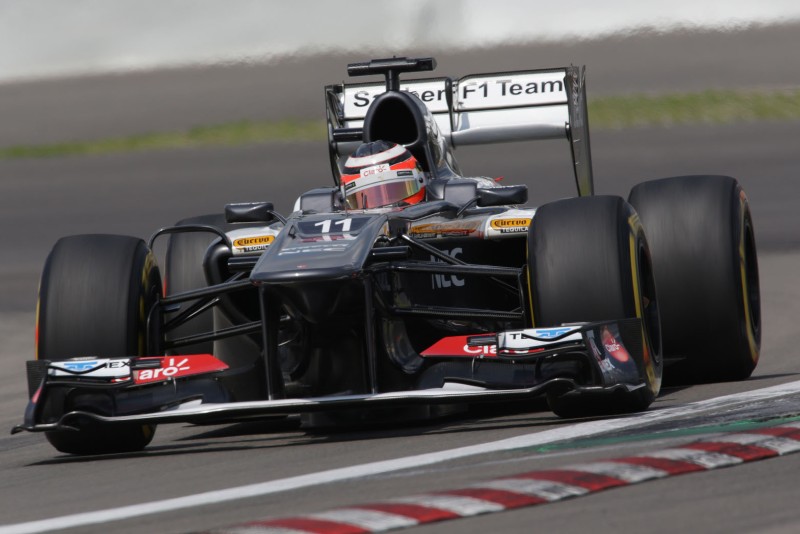 Hulkenberg: Not all diamonds have lasting shine

No amount of dressing can hide the fact that to go 170 starts without a single podium is not what any F1 team looks to sign.

Earlier this month, Renault announced that Esteban Ocon would be replacing Hulkenberg in its line-up next year, despite the German being the team’s top points scorer since joining in 2017. A statement the team was in no denial over.

“I wish to thank Nico for his phenomenal involvement and massive contribution to our progress over the past three seasons,” team boss Cyril Abiteboul said in the confirmation of Ocon’s signing.

“When Nico decided to join us, the team was ninth. He brought us to fourth place last year and was seventh in the drivers’ championship. The imminent end of his contract made this decision a difficult one as Nico has been a pillar of this progress.”

His 2018 points tally was the best outside of the top teams, but was only the first time he has led the midfield pack.

As a F1 rookie, Hulkenberg didn’t appear rattled by the switch from GP2 wins to scrapping for lowly points, but his feverish reputation was dimmed as experienced team-mate Rubens Barrichello beat him again and again. 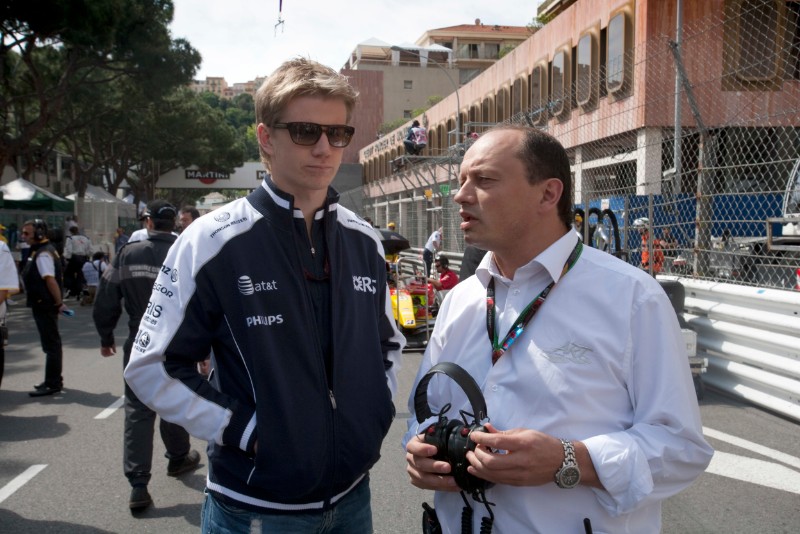 It was another wet qualifying session in 2010 where his career supposedly peaked, as he took pole at the Brazilian GP by over a second by gambling on slick tyres. He had less than half of the points Barrichello had though, had a lower average starting position despite his pole, and far less money than Pastor Maldonado was bringing as his replacement in 2011.

While efficient in 2012 and ’13, having spent a season on the sidelines as Force India’s reserve, the formidable partnership he formed with Sergio Perez after that as Force India grew in competitivity wasn’t necessarily a reflection of an improving driver.

What could be described as complacency crept into Hulkenberg’s driving the bigger the result was. Sloppy racecraft was still rare, but there were instances like colliding with Perez at the Hungaroring in 2014 on a particularly strong weekend for the team. What’s worse, it mirrored the Brazil clash in changing conditions from two years earlier.

Even in relatively unimportant on-track exchanges, the times he has come unstuck have often been against top drivers and cars or his own team-mate. Abiteboul has defended his driver at Renault, saying he can only make one mistake per season.

At the start of his F1 career, Hulkenberg alluded that holding himself up to the ‘highest expectations’ can be counterproductive. In interpretation alone, this is a racing driver’s belief that it’s unjust to drive a car not matching of their talent; or that can at least let them fight others of equal status. 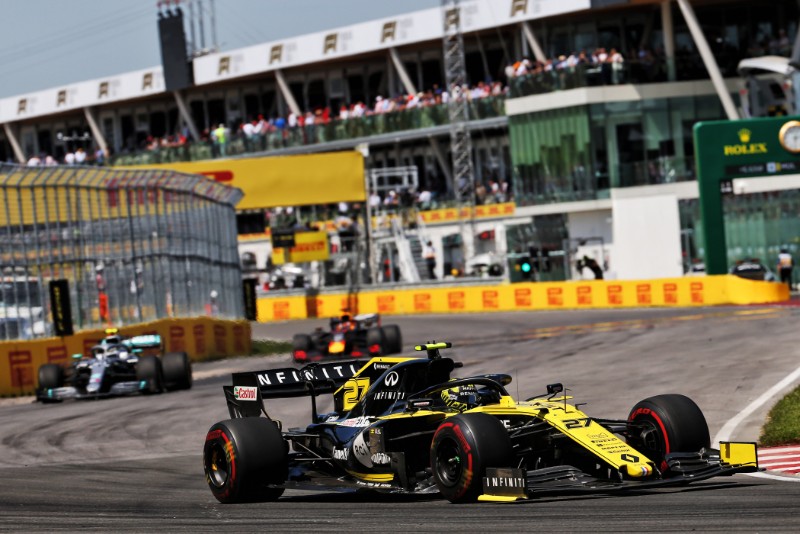 After Brazil 2012, he thrived in battle with the likes of Fernando Alonso, Button and Hamilton at Sauber and revived the hyperbole he arrived in F1 with. Giantkilling hasn’t been on the agenda since, and perhaps Hulkenberg has redrawn his horizons to make him the top-class midfield operator he is today. Of course, it was Perez who took four podiums and ultimately scored more points in two of their three seasons together.

Perez doesn’t embrace his “King of the Midfield” tag, but enjoys the culture and security of remaining at Racing Point (nee Force India), while Hulkenberg has never looked secure at any team he’s raced at.

This corresponds with Hulkenberg’s own words on his most recent departure: “It is well known that the choice of drivers is not only about performance, it is a whole bundle of factors. But that’s the way it is.”

Renault wants to be seen as an ambitious team, encapsulated by 2019 hire Daniel Ricciardo, and is aiming to return to title-winning glory. It’s taken Hulkenberg out of those plans now for that very reason; it wants a world champion-capable driver.

Has F1 wasted a decade on Nico Hulkenberg? Given he was supposed to be the next Schumacher but has never finished a race higher than fourth, you could argue he has been a wasted resource in more ways than one. 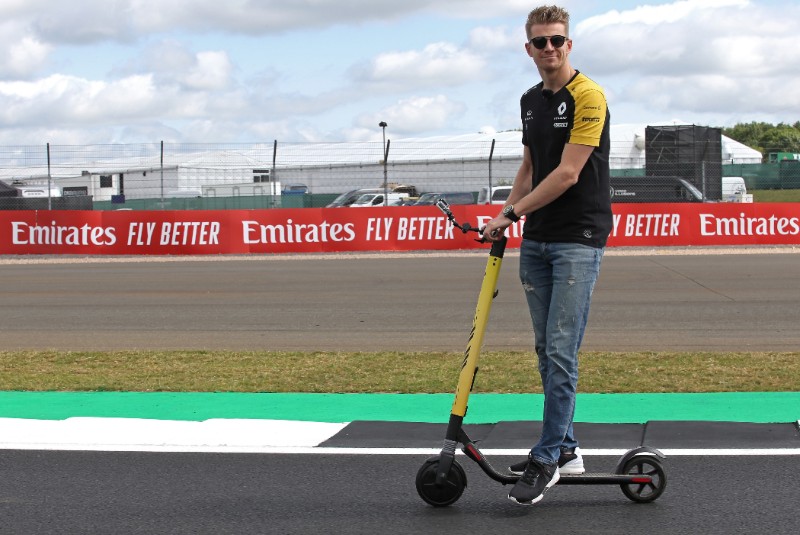