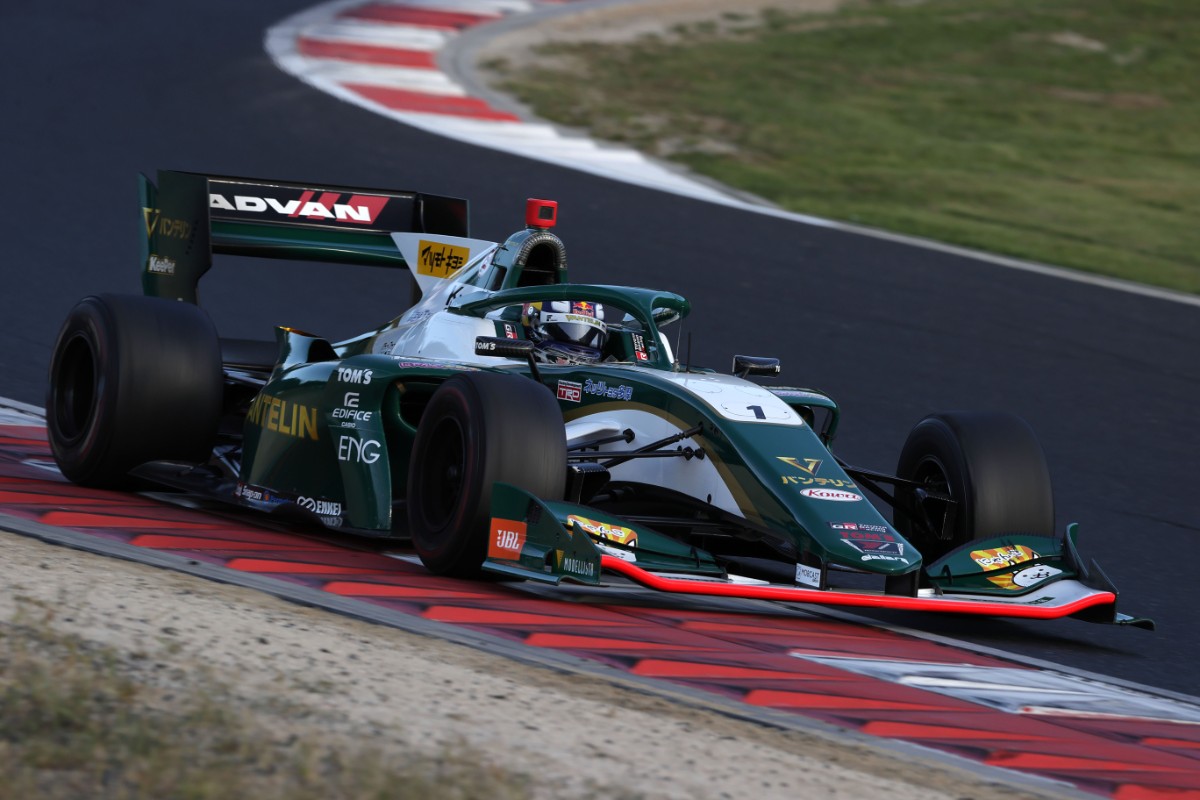 The TOM’S driver in fourth and made up a place on the opening lap after Sacha Fenestraz was forced through the gravel trap at turn 1, which led to him retiring with a smoking car at the end of the lap.

Debuting poleman Sergio Sette Camara lost the lead to Hirakawa through Turn 1, but ran in a comfortable second place until the start of the pitstop phase of the race.

On his in-lap he dropped two seconds to Naoki Yamamoto and Cassidy behind him and was passed by both, and during his pitstop his B-MAX Racing by Motopark team examined the rear of his car. When he returned to track, he only ran for a few corners before he crashed out on cold tyres.

This incident brought out the safety car, and afforded the opportunity for Hirakawa (Impul), Yamamoto (Dandelion) and Cassidy to pit without losing position at the front. Such is shortness of the Sugo lap, all but the top nine ended up a lap down.

This prolonged the safety car period, with those drivers unable to unlap themselves until Sette Camara’s car had been recovered.

After the safety car restart, Cassidy passed Yamamoto and Hirakawa within the space of two laps to claim the lead, then managed the race from the front for the rest of its duration.

Hirakawa and Yamamoto dropped back after being passed, while Team Mugen’s Tomoki Nojiri finished a quiet fourth.

KCMG’s Yuji Kumimoto started 14th but claimed fifth ahead of Kondo’s Kenta Yamashita and Nakajima’s Tadasuke Makino, who made up places during the pitstops.

Hiroaki Ishiura finished the race in eighth for INGING, with Kazuya Oshima (Rookie Racing) and Nirei Fukuzumi (Dandelion) rising up the grid from 17th qand 16th to complete the top 10.

Okayama winner Sho Tsuboi had a dissapointing run to 13th, while KCMG’s Kamui Kobayashi made up 10 spots in the opening two laps but then picked a poor strategy that compounded him to being the last driver on the lead lap.

TOM’S driver Kazuki Nakajima fared even worse and was lapped, while Ukyo Sasahara (Mugen) and Koudai Tsukakoshi (ThreeBond) retired in the pits.