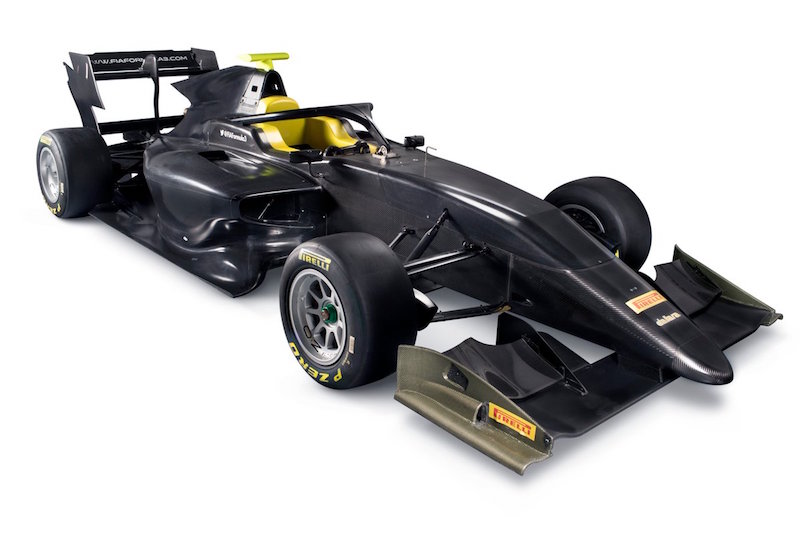 The car for the new-for-2019 FIA Formula 3 Championship has been unveiled in the Formula 1 paddock in Abu Dhabi.

The new series effectively replaces GP3, promoted by Bruno Michel and Formula 1, and will feature many of the same characteristics, with a single-specification of car built by Dallara, powered by a Mecachrome engine and supplied with Pirelli tyres.

As in GP3, the engine will be a 3.4-litre, six-cylinder normally-aspirated unit, albeit producing 380 bhp rather than 400 of GP3, but significantly more than the approximately 240 bhp produced by the latest generation of European F3 engines.

The F3 2019 car, which is intended to be raced for the next three seasons,? features the halo already used this year in F1 and F2, as well as the Drag Reduction System already introduced to GP3.

The aerodynamics have been designed with an emphasis on promoting overtaking, “with very low ride height sensitivity and a wide range of suspension set up possibilities”.

The car completed a successful shakedown at Magny-Cours in October 16 and has since undergone more than 1000 kilometres of testing, including last week at Jerez. Further tests are planned for Bahrain and Abu Dhabi in December before cars are delivered to teams across January and February in time for pre-season testing.

“Our focus was to provide a safe and challenging car which will enable close racing and encourage overtaking,” said Michel.

“When designing this car, we also kept in mind cost effectiveness in order to limit operational costs for the teams, but also deliver an attractive package.”

The FIA’s Charlie Whiting said: “We are pleased to unveil the exciting new 2019 FIA Formula 3 car here in Abu Dhabi, marking the final step in the process of bringing the FIA Formula 3 Championship onto the same platform as Formula 2 and Formula 1, which has been an important goal for the FIA.

?This car, while more powerful and spectacular than previous iterations, will include the latest safety standards for single-seaters, in line with the developments we continue to make at the very highest levels of the sport.”