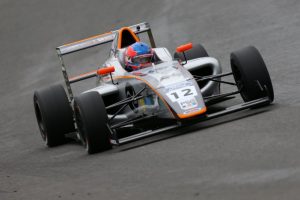 Founded in 1995, the Dronfield-based team was set up to run Jame Hunter in the Formula Renault Eurocup and FR2.0 UK. After his death, his brother Steve continued to run the team, and it joined British F4 (known then as MSA Formula) in 2015. It finished second in 2016 with Sennan Fielding, gave Billy Monger his single-seater debut, and fielded three cars this year.

“It is a strong championship which runs on an impressive package and is exceptionally well organised. We’ve travelled to a few meetings this year and have been very impressed with not only the Championship itself but also the way that it has been put together.

“We are currently utilising our bespoke, in-house simulator which mirrors the on-track performance of the cars, so drivers will be able to gain knowledge and develop their skills in conjunction with a comprehensive on track test program.”

The team has been successful in several championships on the TOCA support package, including British F4, but was banned from Ginettas last year due to engine irregularities.

Simmons, who won four times with the team this year in British F4, made three British F3 appearances towards the end of the season, and got two top five finishes. The Anglo-Spaniard is expected to move full-time into the championship next year.