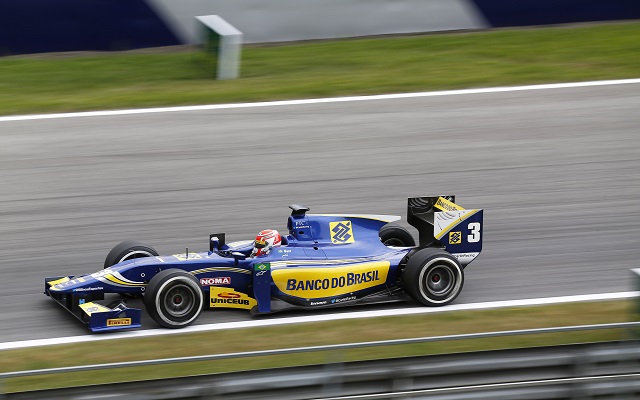 Carlin Racing’s Felipe Nasr recorded his first feature race victory in the fourth round of the 2014 GP2 season at Spielberg.

Nasr made a great start from third on the grid to take first into turn one and proceeded to lead every lap of the race.

Johnny Cecotto and Jolyon Palmer, who made up the front row ahead of Nasr, both had really slow getaways off the line. The Venezuelan held on to second, while Palmer was demoted to fourth by Stefano Coletti.

Cecotto caught up with Nasr over the opening lap but couldn’t get the lead back and lost pace over the subsequent early laps, keeping many of the potential challengers away from the Brazilian. After a few laps, Coletti broke through the Trident’s racer defence with Palmer squeezing through as well – but, by that point, Nasr had built up a safe four-second lead.

However, it was rather obvious that Coletti had no intention of settling for second. The Monegasque put in two fastest laps in a row, taking a second and a half out of Nasr, before being told to stop pushing over the team radio.

By that point, the racers who started on option tyres started to struggle for pace. While Stoffel Vandoorne was the first frontrunner to take to the pits, the championship leader opted to stay out for a couple more laps. It wasn’t the right call, as Palmer rejoined narrowly behind Vandoorne and couldn’t keep up with the Belgian due to colder tyres. Instead, the Brit found himself fighting off other early-stoppers in Raffaele Marciello and Alexander Rossi.

As such, the race for the podium places was going on in two different parts of the track – Nasr and Coletti were pulling away in the lead, while those who already stopped were battling further down the order in clean air.

Vandoorne and other drivers from the latter group appeared to be marginally faster than anyone else, but then caught up to the lower half of the top ten, where slower cars were fighting it out for places outside of the top ten. First, Vandoorne closed in on Simon Trummer and managed to rather quickly get through into Schlossgold, with Palmer following close behind.

A bit later, Vandoorne succeeded in clearing Conor Daly and, yet again, Palmer was there to make use of the overtake. The Brit also emerged ahead of the Venezuela GP driver, who believed the manner of the overtake was outside the rules.

The leading group finally started to take to the pits in the last stint of the race. Cecotto rejoined way behind Vandoorne, Palmer and Marciello (the latter having kept up with his more experienced opponents in traffic). Instead, the Trident racer had to fend off attacks from Rossi, which allowed Evans to clear both of them due to a later stop.

Nasr and Coletti, separated by two and a half seconds for most of the race, came in on the same lap. The Brazilian rejoined in the lead, while Coletti exited pit road just barely ahead of Vandoorne and was almost immediately overtaken. Behind them, Marciello executed a gusty move on Palmer into the Castro Edge corner and then passed his teammate on the next lap.

Vandoorne managed to get within a second and a half of Nasr, but the race for victory was over as soon as the Brazilian got his tyres warmed up, upon which he was more than half a second quicker.

As such, Nasr went on to secure his maiden feature race win in GP2. Vandoorne kept second despite last-lap pressure from Marciello, who earned his first points in GP2 with a podium finish.

Coletti was fourth, ahead of Palmer and Cecotto. Evans finished behind the Venezuelan but ahead of Rossi, who will start tomorrow’s race from reverse-grid pole position.

Takuya Izawa was ninth, while Arthur Pic managed tenth despite a very slow stop – maintaining the Frenchman’s record of top-ten finishes in every race of the season thus far.

UPDATE: Tio Ellinas received a time penalty equivalent to a drive through for forcing Coletti off-track after Turn 2.