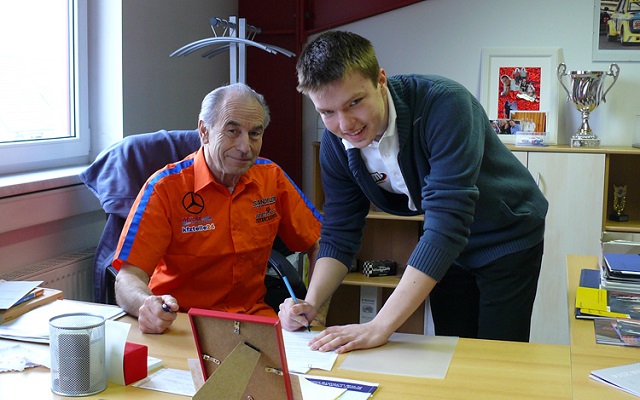 German karting graduate Benjamin Mazatis has signed a two-year deal with ADAC Formel Masters champions Mucke Motorsport, which will see him train with the team in 2014 in preparation for full-time seat in the 2015 season.

Mazatis, 16, was discovered by Mucke during the 2012 Formula BMW Talent Cup shoot-out at Spielberg, where he took the runner-up spot, narrowly losing out to Jules Szymkowiak.

The young German follows in the footsteps of Mucke protege Maximilian Gunther, who was similarly picked up for a development year in 2012 and took the runner-up spot on his debut in the 2013 season.

“We are delighted to welcome Benjamin Mazatis as another promising talent to our team. His success in the karting sport and his first experiences in the Formula racer provide him with the ideal foundation to master our challenging training programme and then enter into the ADAC Formula Masters well-prepared for success”, stated team boss Peter Mucke. “This is a tried and tested method offered to young drivers by our team.? The most recent, impressive proof was delivered by Israeli Roy Nissany, who will race for?Team kfzteile24 M?cke Motorsport in the 2014 FIA Formula 3 European Championship, and Maximilian G?nther, who had achieved the ADAC Formula Masters rookie vice-championship title last year, following his training year in 2012.”

Mucke Motorsport were imperious in ADAC Formel Masters in 2013, securing a dominant 1-2 in the standings with Alessio Picariello and Gunther. The Berlin-based team already confirmed one of their drivers for 2014, having signed race winner Marvin Dienst.