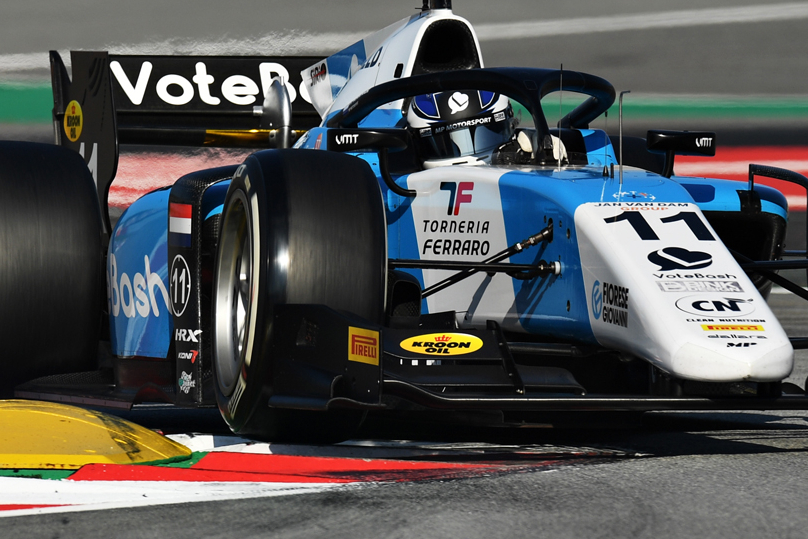 Richard Verschoor took his maiden Formula 2 victory in the second sprint race at Silverstone, where he went unchallenged.

It was MP Motorsport’s first win of the season as well as Verschoor’s first regular season win in racing since 2017.

DAMS’ Marcus Armstrong came home in second to take his first podium of the season. Carlin’s Dan Ticktum also stepped on the podium after holding on to his grid place of third.

As in the first race, the safety car was deployed for an opening lap incident, this time at turn five. It began when Matteo Nannini momentarily lost his rear, and Campos Racing team mate Ralph Boschung put two wheels on the grass while trying to avoid him and spun round.

Boschung’s car ended up in the middle of the track and was collected by HWA Racelab’s Alessio Deledda. Both were forced to retire due to the damage to their cars.

Another incident on lap six between Carlin’s Jehan Daruvala and Trident’s Bent Viscaal brought the safety car out again just two laps after the race had resumed.

Daruvala lost the control of his car under braking at Stowe just when Viscaal was trying to overtake him around the outside.

Viscaal was forced to retire for the first time this year, while Daruvala could continue after pitting for a new front wing. Daruvala was handed a 10s penalty as he was deemed responsible for the incident.

From that point onwards, it was a fairly quiet race until some drivers started to struggle with their tyres with three laps to go.

Prema’s Oscar Piastri was the first to take advantage from that. After going side-by-side with Hitech GP’s Liam Lawson, he managed to pass down the inside at Brooklands. This move pushed Lawson down to fifth.

Piastri still had enough tyre life to take fastest lap on the last lap for the second race in a row.

Juri Vips, Felipe Drugovich and David Beckmann took the last points places. Beckmann made a solid start, gaining five places and was able to hold on to eighth for the whole race.

The top 10 was completed by MP’s Lirim Zendeli and ART Grand Prix’s Theo Pourchaire, who lost places at the start and couldn’t recover. His team-mate Christian Lundgaard stalled on the formation lap, meaning he had to start in the pitlane.

Fellow Alpine junior Guanyu Zhou, who was championship leader coming into this weekend, charged to 11th from last on the grid.