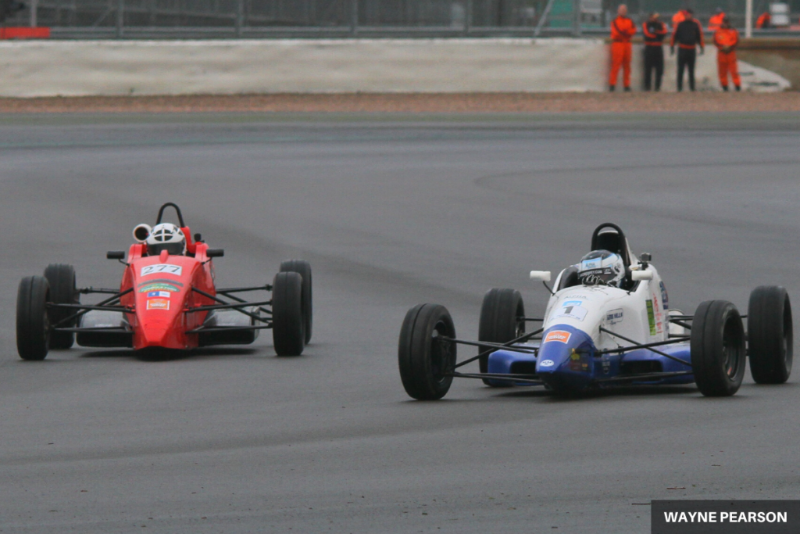 Michael Moyers and Joey Foster rose from the back to finish first and second in the Walter Hayes Trophy Progression Race, putting them in the Last Chance Race.

Don Hardman Racing’s Foster and Kevin Mills Racing’s Moyers started 23rd and 25th on the grid afrer crashing out of their heat, but used their five WHT wins-worth of experience to quickly rise up the field.

At first if was Foster who had the advantage, climbing to 10th on the first lap and then to fifth a lap later. Moyers stuck in his wheeltracks, with the circuit still being too slippy off-line to risk an ambitious move, and they led the field by the fourth lap of 10.

Less than a tenth of a second split the pair at the halfway point, at which point Moyers then took over at the front of the race. Moyers could only eke out a few tenths of a second once ahead, with successive fastest laps from Foster keeping him on his gearbox as they navigated lapped traffic.

On the final lap, their first without cars to overtake or backmarkers to lap, Moyers pushed hard to set a 1m07.993s lap, the fastest of the race and enough to take victory by 0.391s.

During their battle, a full 20s had emerged between themselves and Sam Street, who had started in second and only conceded third place on the last lap to Moyers’ South African team-mate Alex Gillespie.

At the start of the race, Colborn beckoned for marshals to push him forward from his third placed grid spot then back into position, resulting in an extra green flag lap for the race.

A poor start from poleman Henry Campbell meant he then spent the first few laps in second behind Street, before the charging Foster and Moyers came through.

The top 16, who all progress to the Last Chance Race, were relatively settled after a few laps but a frantic battle for the ‘pointless’ 17th place still took place behind.

Colborn’s team-mate Stephen Bracegirdle made a last lap move to take the position, with five cars spread by less than two seconds as they finished the race.