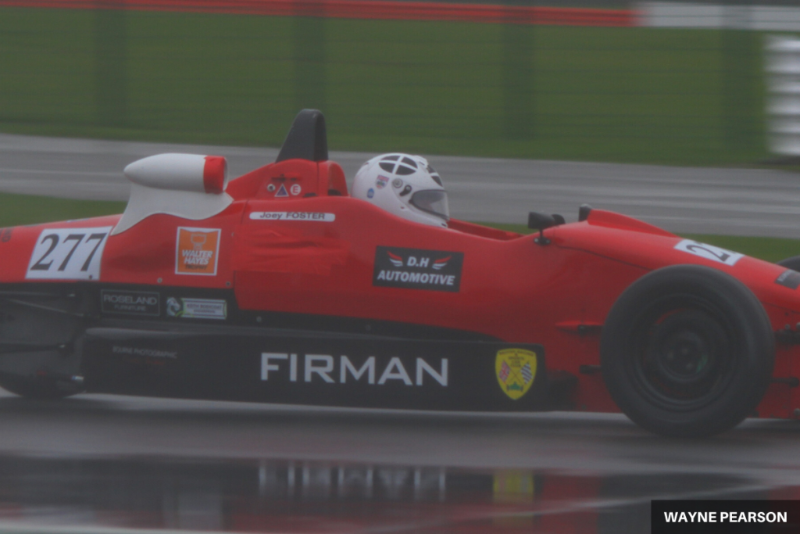 Joey Foster and Michael Moyers have disputed the collision which resulted in both retiring from the second Walter Hayes Trophy heat at Silverstone.

The pair clashed at Copse while contesting the lead, damaging the suspension of both. Team USA scholar Scott Huffaker benefited to win.

Foster and Moyers now need to take strong results from 24th and 26th on the Progression Race grid to make the semi-finals.

?My car didn?t really come on [strong] very early,? Moyers said. ?But I wasn?t just going to give the place away. We had a little gap to third and I thought we?d work together a little bit.

?It was a little bit ill-tempered from the word go. I was getting hit from behind three or four times a lap. He got the overlap on me in Luffield, which is absolutely fair enough.

?I felt I?d gone into Copse quite deep and given him plenty of room because it was obviously wet on the inside still.

?We are two of the most experienced drivers in the field, we shouldn?t really be doing things like that. He?s going to blame me, I?m going to blame him, it is what it is?.

Three-time WHT winner Foster believed Moyers turned in on him mid-corner, causing him to slide into his rival on a slippery track.

?It?s frustrating,? said Foster. ?I thought we?d worked well together, we could make a break and perhaps then [battle] it out at the end. It turns out my car actually had a lot of pace and I was getting a run on him on every straight.

?I pulled alongside on the Wellington Straight a couple of times and it was never really going to happen [at Brooklands] so I let him stay in front, and got a really good run onto the pit straight.

?I got right alongside ? in fact I got in front ? coming into Copse, and Mike for some reason tried to run it around the outside. He turned in mid-track which left me just on the dry line. In the wet there?s no grip [there], and my car’s rear stepped out.

?I knew it was coming, there?s nothing you can do when you?re in that situation. I hope he understands, but he left me with nowhere to go.?

Despite having a lot of work to do to add to his 2017 and ?18 WHT triumphs, Moyers remains optimistic.

?It?s not over at all,? Moyers added. ?My team-mate [Roger Orgee] a few years ago had to do this same thing, go through the Progression/Last Chance races, and ended fifth in the final.

?We?ve shown in testing I’m one of the quickest, whether it?s the wet, dry, whatever conditions. I?ve come to win it again. It will be tough to do the hat-trick but I?m going to drive my socks off.?

Foster also remained positive, having won from the back in BRSCC National Formula Ford 1600 this year.

?It gives us a few cars to overtake, which should be fun,? said Foster. ?Hopefully I can make progress and be near the front in the final but, it?s a big ask.?