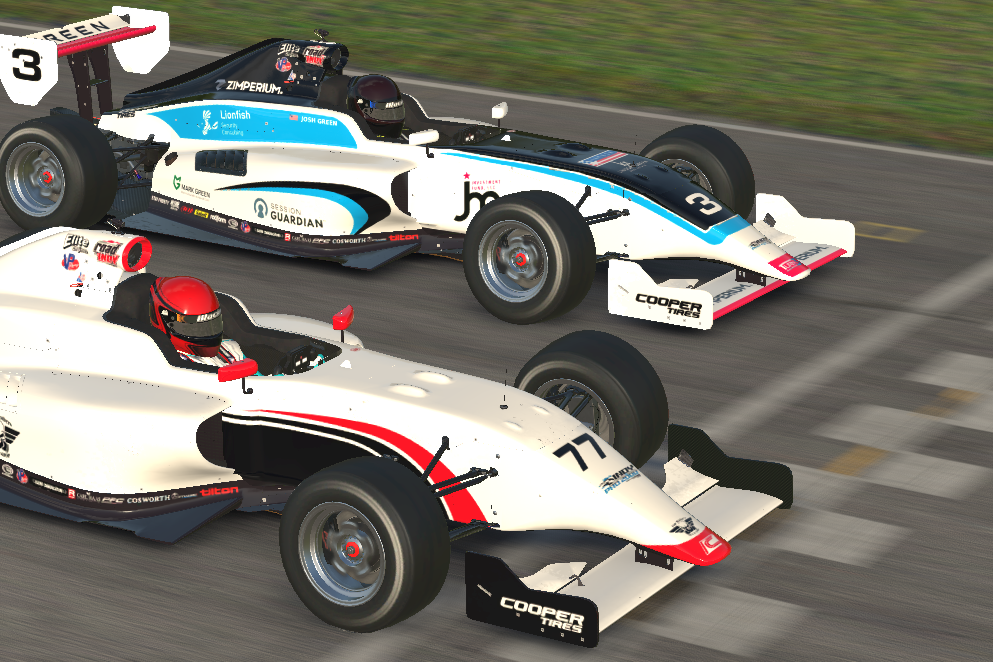 Frank Mossman finished first and second in the two Road to Indy eSeries races at Road America on Monday night.

The junior karter was beaten to pole by Alessandro de Tullio by 0.268 seconds, and he stuck to the gearbox of the poleman at the start of race one until Turn 3 Motorsport’s Josh Green made is way through into second before the end of lap one.

Mossmann was promoted back to second when de Tullio spun out of the lead with an unforced error, and he then passed Green to take the lead. But on the next lap Green passed him back at the turn five left-hander.

Their race strategy changed at this point, as they pulled away from the rest of the field rather than fight each other. Mossman sat in Green’s mirrors until lap 10, the final lap, and went down the inside of turn one for the lead.

He immediately started swerving to then defend first place, copping a warning from race control straight away, and Green managed to break his defences with a brilliant move set up through several corners in the final sector. But Mossman had a stronget run out of the final corner and up the hill to the finish, and slipstreamed past in a photo finish to win by just 0.020s.

De Tullio dropped to ninth with his spin but charged back up to third by the finish, also taking the position in a photo finish as he beat Dylan Christie by 0.064s. Lucas Mann was fifth, ahead of Matthew Brabham and Simon Sikes who was among the lead cars early on before being tapped into the gravel.

Dean Dybdahl and Nikita Lastochkin shared the front row of the reversed grid for race two, and Dybdahl made a strong getaway when the green flag was waved. However Lastochkin had more momentum as they got to turn one and went around the outside. There was slight contact and Lastochkin dramatically went off track, with further drama occurring at turn four.

This helped de Tullio into third, and then at the final corner Dybdahl spun himself out of the lead. De Tullio passed Mossman up the hill and ended lap one in the lead.

He was closely followed by Mossman, Green and Sikes who formed a lead group for the next laps. Green took second place on lap four of 10, but Mossman reclaimed the place at turn one on the next lap.

On lap seven he then went to pass de Tullio at turn five, as Sikes got a triple slipstream and tried to pass him, resulting in contact at the front and rear for Sikes and then a spin.

That left just de Tullio and Mossman fighting again, and he tried turn one on the last lap. He couldn’t do it, and taking too much kerbs a few turns later left de Tullio free to win. Green finished third, and Sikes was a distant fourth.