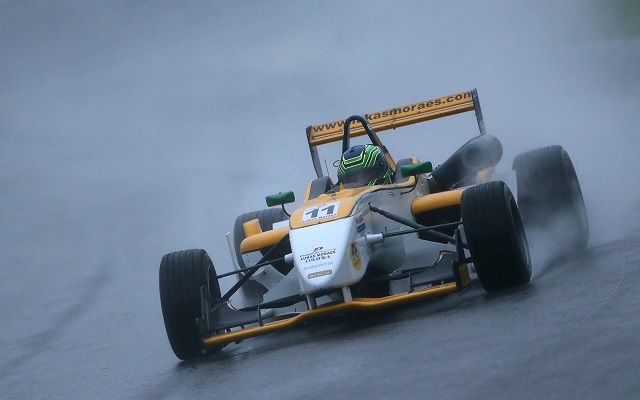 Lukas Moraes will start race one of the Brazil F3 round at Interlagos from pole position.

The Prop Car driver mastered the tricky conditions in a very wet qualifying session and ended Pedro Piquet‘s pole streak with a time of 1:44.756. Moraes, who raced in Formula Abarth in 2013, recorded his first career pole in major junior single-seaters.

Moraes was the dominant driver through the qualifying with a constant two seconds gap to other competitors. In the final minutes, however, the track conditions improved, and Sergio Sette Camara was able to drastically diminish the Prop Car man’s advantage. The driver from Minas Gerais, who is making his car debut after racing in karts with ART’s factory team, will start second, having finished 0.844s behind.

Once again, Vitor Baptista was fastest in Class B. The Cesario man set a benchmark 1:45.822, which was good enough for third overall. Quickest in second practice, Renan Guerra was fourth, followed by 2013 Formula 3 Sudamericana Class B champion Bruno Etman. The Argentinean was in fight for pole in the early stages, but wasn?t able to improve his time in final minutes. Matheus Iorio qualified sixth.

With three poles in three rounds, Pedro Piquet struggled with track conditions. The son of three-times F1 World Champion Nelson Piquet never was a challenger and finished the qualifying more than three seconds behind Moraes.

The session was interrupted early due to a red flag caused by Arthur Oliveira. Because of that, the Hitech man will start last this afternoon.