written by Rachel Harris-Gardiner 7 May 2018 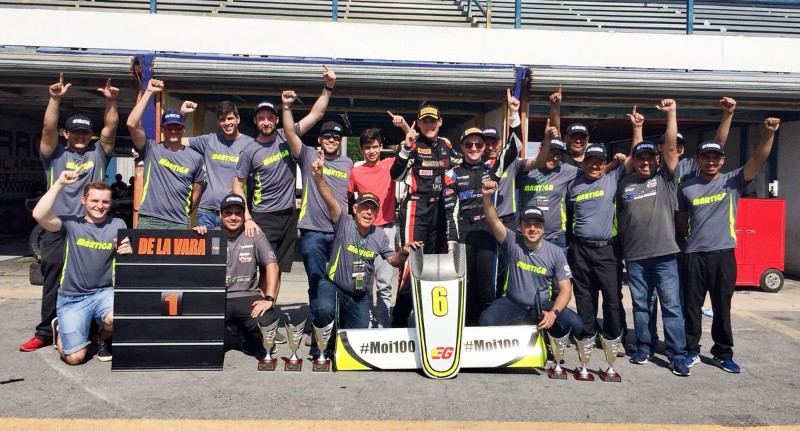 Moises de la Vara put in a dominant performance at Monterrey to win the 2017-18 NACAM Formula 4 title with one round to go.

The Scuderia Martiga EG driver won all three races and is now 90 points clear of his nearest rival Igor Fraga, with only 75 points on offer in the last three races in Mexico City.

His championship prize, a ticket to the 2018 Mazda Road to Indy Shootout, is not guaranteed though due to a drug-related ban he is serving in America.

de la Vara secured a lock-out of wins, while Fraga had to make do with a fourth and fifth place. A triumphant de la Vara posed on the podium holding a broom to represent his clean sweep.

Fraga was lucky to have scored any points at all, as it was only down to the heroics of his mechanics that he got on track in the first place. Despite posting some table-topping times in free practice, he was unable to start race one due to a serious turbo problem.

He picked up enough points in races two and three to cement his second place in the championship, an unassailable 88 points ahead of Michael Santos.

Martiga EG had drafted in extra drivers for the weekend, the best of which was Kory Enders, who normally races in USF2000. The American posted two seconds and a third place. The team also ran Chara Mansur and Francisco Porto, who are both rookies. Porto took the fastest lap in the first race.

Noel Leon Vasquez was another new face in the championship, driving for Ram Racing. The inexperienced Vasquez had an impressive debut with two podium finishes. He was particularly strong in the second race and got within two second of de la Vara. He was deputising for Santos, who was in Germany negotiating a future sponsorship deal.

Emiliano Jauregui and Inigo Leon were the only other series regulars on duty at Monterrey. Leon had secured a seat with Prop Car alongside Fraga, after the dramatic departure of his former team MomoF4 after the Yucatan meeting. Jauregui continued in his role as RAM?s second driver.