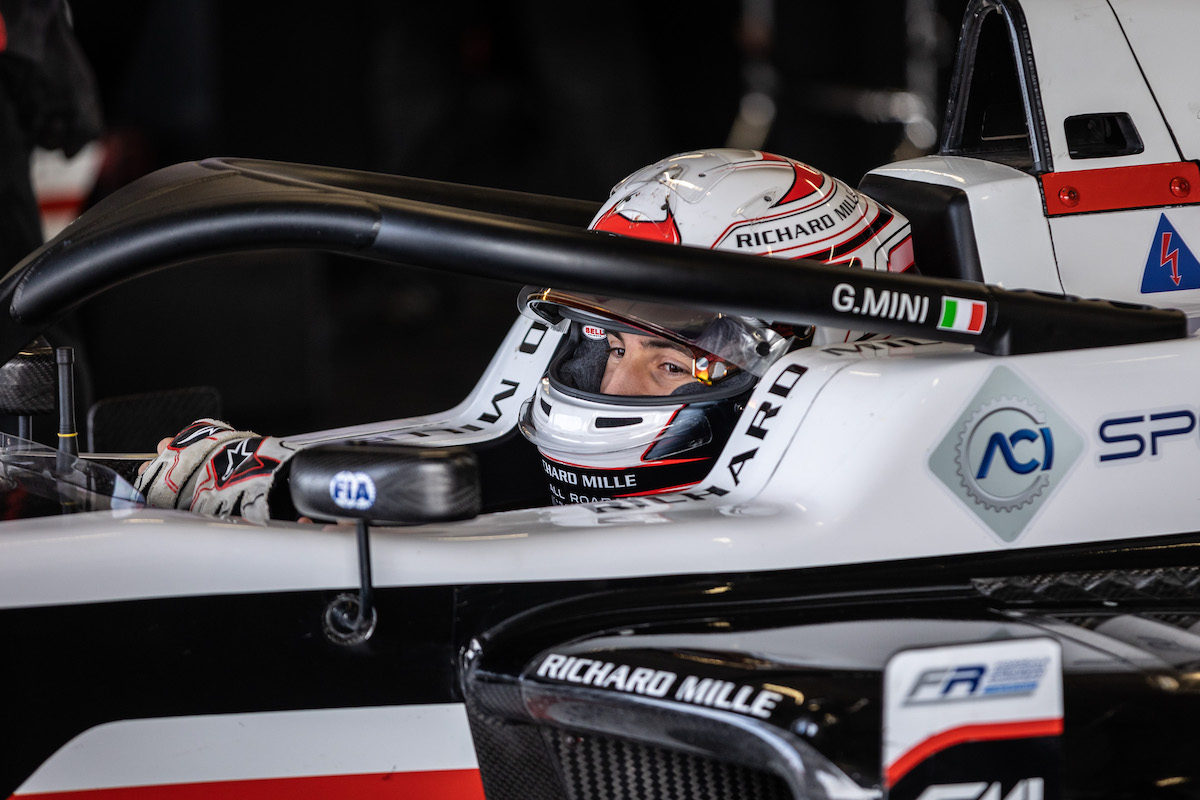 Gabriele Mini and Maceo Capietto shared the top spots in a pair of Formula Regional European Championship by Alpine practice sessions at Imola both affected by weather.

The first 50-minute session was delayed slightly due to the rain-induced interruption in the morning’s Italian Formula 4 running and was held in continued wet conditions.

The first of four red flags came 10 minutes in as Monolite’s Cenyu Han and R-ace GP’s Lorenzo Fluxa both went off in the second part of the lap.

The session had only resumed for six minutes when two more cars went off. This time it was RPM’s Keith Donegan and FA Racing by MP’s Esteban Masson – the latter having been top of the times when the first stoppage occurred.

With 20 minutes to go, MP Motorsport’s Michael Belov was top of the times, and he proceeded to improve further. That was until a third red flag. Gravel was brought onto the circuit by one of the cars, and both Monolite’s Pietro Armanni and Prema’s Hamda Al Qubaisi went off in different parts of the lap.

While some times were improving with a minute to go, there was a fourth red flag called for an unspecified reason and that brought the session to a slightly premature end.

The second 50-minute session started in much better conditions than the first and times duly went down considerably from the morning’s running. It was in the opening 10 minutes where Mini took to the top of the times, over a second quicker than Ramos.

After that time, there was a brief red flag for an unspecified reason, and a second red flag 20 minutes into the session for Masson, having his second off of the day.

The session resumed with half of the allotted time to go, and times struggled to improve as rain fell once more. However, drivers got plenty of meaningful running in until a late red flag with less than a minute to go, as was the case in the first session.

That time, it was championship leader Dino Beganovic, who went off in the first part of the lap on what would have been his final tour.

As such, it was Mini who topped the times ahead of Ramos. ART Grand Prix’s Mari Boya was third quickest ahead of FA Racing’s Victor Bernier.

Prema’s Paul Aron was fifth, ahead of Trident’s Tim Tramnitz. ART’s Laurens Van Hoepen, Arden’s Eduardo Barrichello, Prema’s Beganovic and Braschi rounded out the top 10 of the 36 runners in combined times all set in the second session.