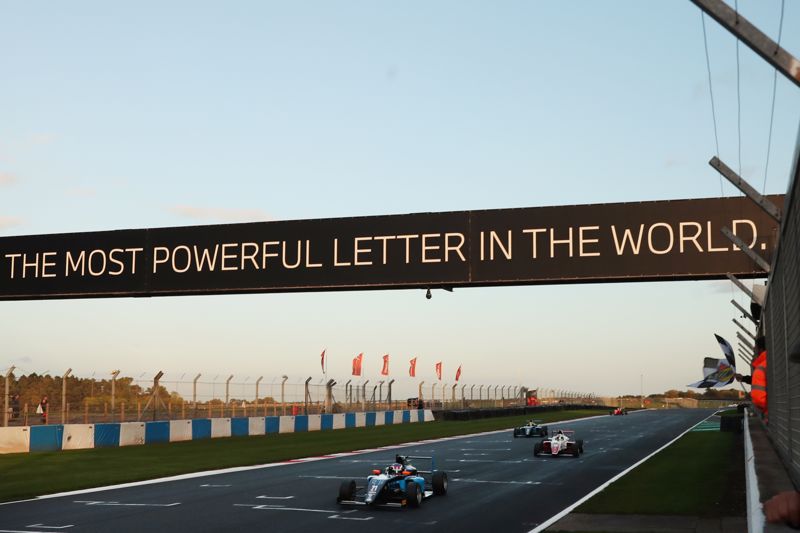 Tom Mills took his second GB4 victory on Saturday, as points leader Nikolas Taylor bounced back from a qualifying crash to finish second at Donington Park.

There was drama before the cars had completed their formation lap, with poleman Jack Sherwood sliding into the gravel at Coppice, ending the Elite Motorsport driver’s remote title hopes and causing a delayed start.

That left Kevin Mills Racing’s Mills on his own on the front row, and he remained ahead into Redgate once the lights went out, with Taylor slotting into second in his rebuilt Fortec Motorsports-run machine.

Jarrod Waberski made a great launch from the third row, but had to settle for fourth into turn one behind Scorpio Motorsport’s debuting Aqil Alibhai, while Megan Gilkes ran wide behind in a three-way battle and lost ground.

Gilkes’ team-mate Max Marzorati passed William Macintyre and Oliver Clarke to climb from ninth to fifth on lap one.

Waberski moved ahead of Alibhai into Redgate on lap three, as his team-mate Mills pulled over one second clear of Taylor.

The lead gap was reduced late on, with Mills locking up on the final lap, but he held off Taylor and Waberski at the chequered flag, the trio separated by 0.873s

Alibhai marked his and Scorpio’s debut with a lonely but solid fourth, as Gilkes recovered to fifth.

Clarke moved back ahead of team-mate Marzorati early on, but then spun off after bouncing over a kerb exiting Redgate and dropped to 11th.

Marzorati slipped back to seventh, with Elite’s Macintyre passing him into Goddards to claim sixth on his debut.

Taylor now leads Marzorati by 45 points, and could seal the crown with a race to spare in race two on Sunday.