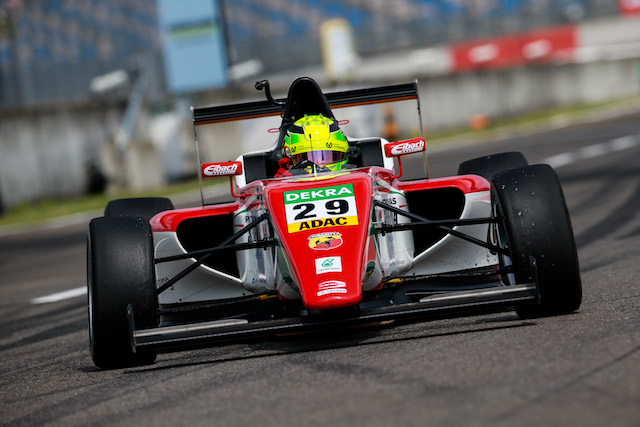 Mick Schumacher has taken his second win of the season in the ADAC F4 series in?a?red flag-affected race one at the Lausitzring.

Making a good initial start, Schumacher looked untouchable before a first-lap pile-up red-flagged the race and reset the drivers’?positions. The race was restarted behind the safety car with 10 minutes on the clock and Schumacher simply drove away from the rest of the grid to take his third?win in the series.

Mid way through the first lap, Kim-Luis Schramm?was sent sideways coming off?the back straight and made contact with Sophia Floersch’s front wing. Floersch then tagged?the leading?rookie?Nicklas Nielsen, pitching him into a spin and sending him back in front of the field. As the drivers were around seven wide going through the corner, there was a huge pile-up with the eventual total retirees sitting at 10 from the?one incident.

With Schumacher comfortably leading from the restart, it was?Kami Laliberte who finished a distant second. Laliberte was just able to keep behind Thomas Preining?who finished third. Preining had initially got into third position from fourth on the grid into Turn 1 before the red flag, but had to retake the position after the race was restarted.

Jannes Fittje came home in a lonely fourth position after falling down from third on the grid, with rookie driver?Felipe Drugovich holding off a fast Joey Mawson for fifth position in the closing stages of the race. Juri Vips finished where he started in seventh, while Schramm able to take advantage of the reset to finish in eighth position.

The final two positions were completed by Mike David Ortmann, who moved into the points from 11th, and rookie Leonard Hoogenboom rounding out the top 10.