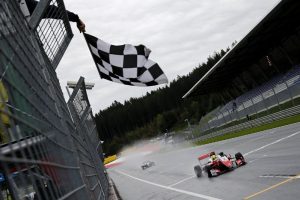 Polesitter Schumacher and fellow front-row starter Shwartzman both started well and duelled in the early phase of the 23-lap contest. In the closing stages Schumacher opened up a small gap, but it was back down to 0.9 seconds by the chequered flag.

Motopark’s Dan Ticktum could only manage eighth, dropping down to 10th on the opening lap, and as a result the former championship leader is now 18 points behind Schumacher at the top of the standings.

Despite starting 13th, Hitech GP’s Alex Palou finished the race in third. He and Carlin’s Ferdinand Habsburg made sensational starts, rocketing up towards the front of the field in the opening phases of the race.

Habsburg, started 11th for his home race, and leapt up to fourth on the opening lap before displacing Marcus Armstrong on lap two. However, Habsburg dropped a few places by running wide on the fifth lap, and ended up finishing fifth behind the New Zealender.

Motopark filled sixth to ninth positions, with Juri Vips and Jonathan Aberdein clear of Ticktum’s battle with Fabio Scherer. Carlin’s Jehan Daruvala spent most of his race fighting with Ticktum, and only fell to 10th behind Scherer late on.

Ralf Aron was the only retiree, starting from the back of the grid and then heading to pitlane in his Prema car. He is now 78.5 points off the championship lead.