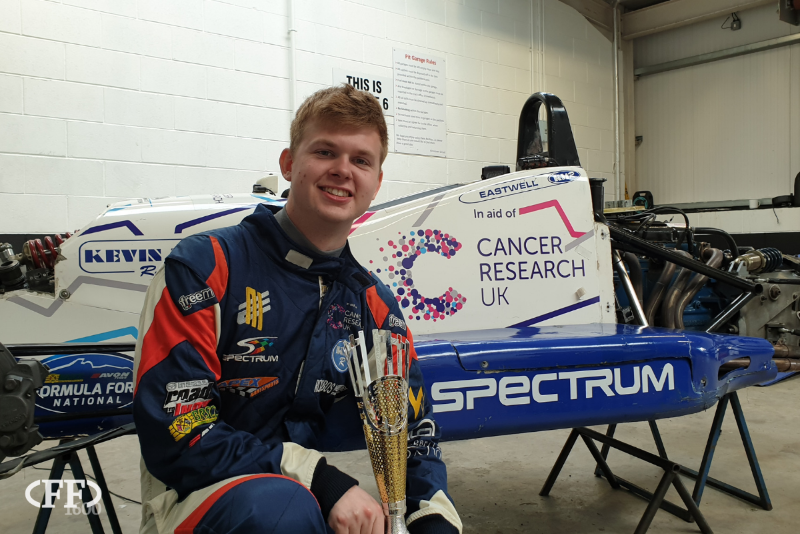 Making his comeback with the same Kevin Mills Racing team with which he debuted, Eastwell started sixth on the grid but profited as drivers ahead came to blows in various incidents, several of which ended up in the Clerk of the Course?s office after the chequered flag.

The first to fall was Ivor McCullough, who made a great start to pass both Will Herron and Rory Smith on the opening lap for second place, behind poleman Jonathan Browne.

While McCullough dropped out entirely, Herron soldiered on down in 11th place with a damaged exhaust, and later retired after clashing with Jamie Sharp.

Now up to third, Eastwell tucked in behind Browne and Smith, who were battling for the lead. A move by Smith down the inside at the first turn put Browne wide, allowing Eastwell to sneak by and take a lead he would hold to the finish.

Browne dropped to fifth after Smith?s failed pass, promoting his Cliff Dempsey Racing team-mate James Clarke to second. That position was short-lived, as championship leader Ross Martin made contact with the rear of Clarke approaching the hairpin.

While Clarke was spun out by the contact, Martin continued in second place and finished 0.326 seconds behind Eastwell.

Browne recovered to finish third, benefiting from Clarke?s spin and Smith retiring with bent steering from his failed move for the lead.

Jamie Thorburn turned in his best performance of the year since switching to the family-run Border Reivers team, with a clean drive taking him from ninth to fourth, 0.030s behind Browne.

A slow start by Spike Kohlbecker dropped him to ninth, but some mid-race passes and good fortune aided his climb back to fifth.

Despite his altercation with Martin, Clarke was able to finish sixth with bent rear suspension.

Morgan Quinn – who made his first forays into racing with two years in the Kirkistown-based Ginetta Junior Ireland – finished seventh, having failed to fend off the advances of Kohlbecker.

Michael Macpherson picked up eighth despite spending most of the race outside the top 10, with Clubman entrants John Svensson and Allan McBurney in ninth and 10th.

Alan Davidson also called it a day three laps from the finish despite showing strong pace. He made it into the top 10 twice, despite spinning at the hairpin, before his retirement.