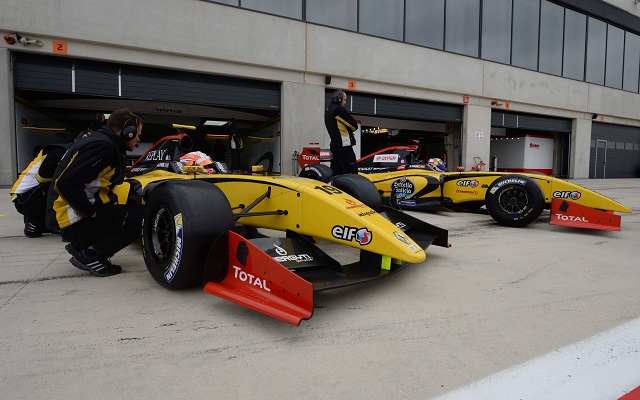 Renault Sport have released a full entry list for the three days of Formula Renault 3.5 pre-season testing at Motorland.

Zeta Corse will field a surprise name in Roberto Merhi, who has spent the last two years in DTM with mixed success. The Spaniard, whose accomplishments in single-seaters include an F3 Euroseries title and race wins in various Formula Renault 2.0 categories, will participate in all three days of running.

On Tuesday, he will be joined by Nigel Melker, who is looking for budget to return to the series after a successful rookie campaign in 2013, while Roman Mavlanov, who is heavily tipped to take one of the seats at Zeta Corse, will do the other two days.

Auto GP graduate Meindert van Buuren will do the entire test with Pons as the Dutch driver is reportedly looking to join the category this year. Series veteran Daniil Move will test with Pons on day one, while GP2 race winner Tom Dillmann, who recently lost out on an expected Russian Time drive, will run on days two and three.

AVF, who are also yet to announce their drivers for 2014, will field just two names. Zoel Amberg, who raced with Pons in 2012 and 2013, will test alongside female racer Beitske Visser, an ex-RBJT member who won races in ADAC Formel Masters.

Tech 1’s recent acquisition Marco Sorensen will share testing duties with Melker on days two and three, with the Dane’s day one stablemate yet to be announced. Comtec’s confirmed driver Nikolay Martsenko will be joined on all three days by South African Liam Venter. Czech squad ISR will only field one car, driven by their 2014 signing Jazeman Jaafar.

The teams that have previously announced their full lineups will not deviate from expectations, all fielding both of their drivers for the entirety of the test. As such, DAMS will field Carlos Sainz, Jr. and Norman Nato, Fortec will run Sergey Sirotkin and Oliver Rowland, Draco will test with Pietro Fantin and Luca Ghiotto, Arden will field Pierre Gasly and Will Buller, Strakka will run Will Stevens and Matias Laine and, finally, Lotus will be present with Matthieu Vaxiviere and Marlon Stockinger.

British team Carlin, who won the teams’ title in 2011, will not be present at the test, but have been selected as one of the squads for the regular 2014 season.