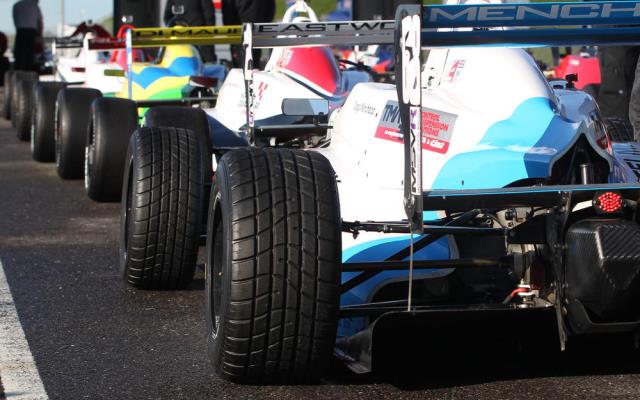 Diego Menchaca claimed his maiden BRDC F4 victory in the opening race of the final round of 2014 at Snetterton, as George Russell failed to capitalise on a pole position start.

The race was red-flagged after a chaotic opening lap that saw Menchaca take the lead, Russell fall down to third and two separate collisions take place that needed clearing.

There was then a further delay when debutant Piers Hickin stopped on the formation lap of the attempted restart.

That left just six laps of racing when the race did eventually get back underway, and Russell would lose a further four places in that time and finish back in seventh.

Up front, Menchaca came under attack from his Douglas Motorsport team-mate Charlie Eastwood, who had climbed to second on the first lap after the restart.

The pair were never separated by more than four tenths of a second at the line, but Telmex protege Menchaca held on by 0.242 seconds as the pair scored their respective best results in the category in a one-two finish for the team.

Sennan Fielding was on a charge from his original starting position of ninth, going from sixth to third in the last three laps past Russell, Struan Moore and Gaetano di Mauro.

Di Mauro had got up to second at the original start, before losing out to Eastwood at the restart and then Fielding on the last lap, finishing fourth.

Moore was fifth, while sixth was Raoul Hyman, who had started from 18th and last on the grid because of a penalty for the incident that put himself and Russell out of the previous race at Donington Park. But he recovered impressively well in the short race, taking sixth away from Russell on just the fourth lap after the restart.

Two crumbs of consolation for Russell were that he held on to seventh ahead of his team-mate and championship Arjun Maini, and that he managed to set the fastest lap of the race on the penultimate lap, thus putting him provisionally on pole position for the final race of the season.

Maini’s championship lead over Russell has been reduced slightly from 21 to 19 points, while Fielding is now just a further three behind. Hyman is still in contention, 34 behind Maini. Moore and Will Palmer – who was eliminated in a first-lap tangle with Jordan Albert – are now out of the running with two races to go.