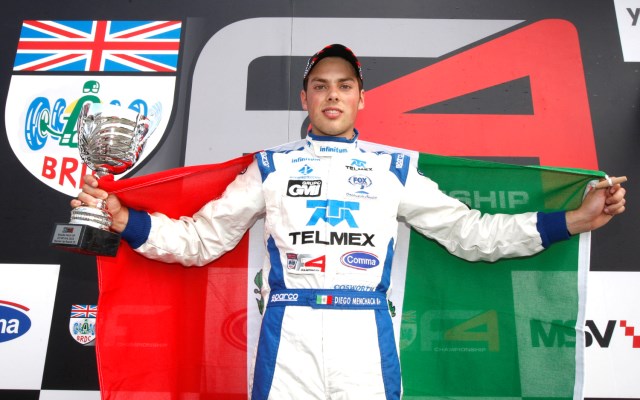 Mexican driver Diego Menchaca will continue in the BRDC F4 Championship for a second season, switching to the Douglas Motorsport team.

2014 will be his third campaign in the UK. After finishing third in the Latam Challenge in 2011, he joined the Formula Renault BARC grid and finished 11th in the 2012 standings. He continued in the series, renamed Protyre Formula Renault, last year alongside his F4 programme, but will focus solely on F4 this time.

?I?m really pleased to continue in the BRDC F4 Championship in 2014,? said 19-year-old Menchaca. ?The series proved itself as the most competitive category to compete in last year and with my experience from last season I really hope to be fighting for wins and of course the Championship this year.

“Douglas Motorsport proved they are a front running team during the Winter Championship, and I am really looking forward to working with them in 2014 and I’m sure they will give me the right tools to accomplish our objectives. I?d like to thank Escuderia Telmex, my sponsors, family and friends for their continued support, and I?m sure we can be challenging at the front in F4 this year.?

“It is great to welcome Diego to the team,” said team boss Wayne Douglas. “Having watched his progress last season we hope he can be running at the front from the first round.

“Diego arrives in the UK in early March and we have an extensive test program in place from that point. We feel we have a very strong driver line-up with Diego and Charlie Eastwood and are very much aiming for the?title to add to our Winter Championship success from last year.”