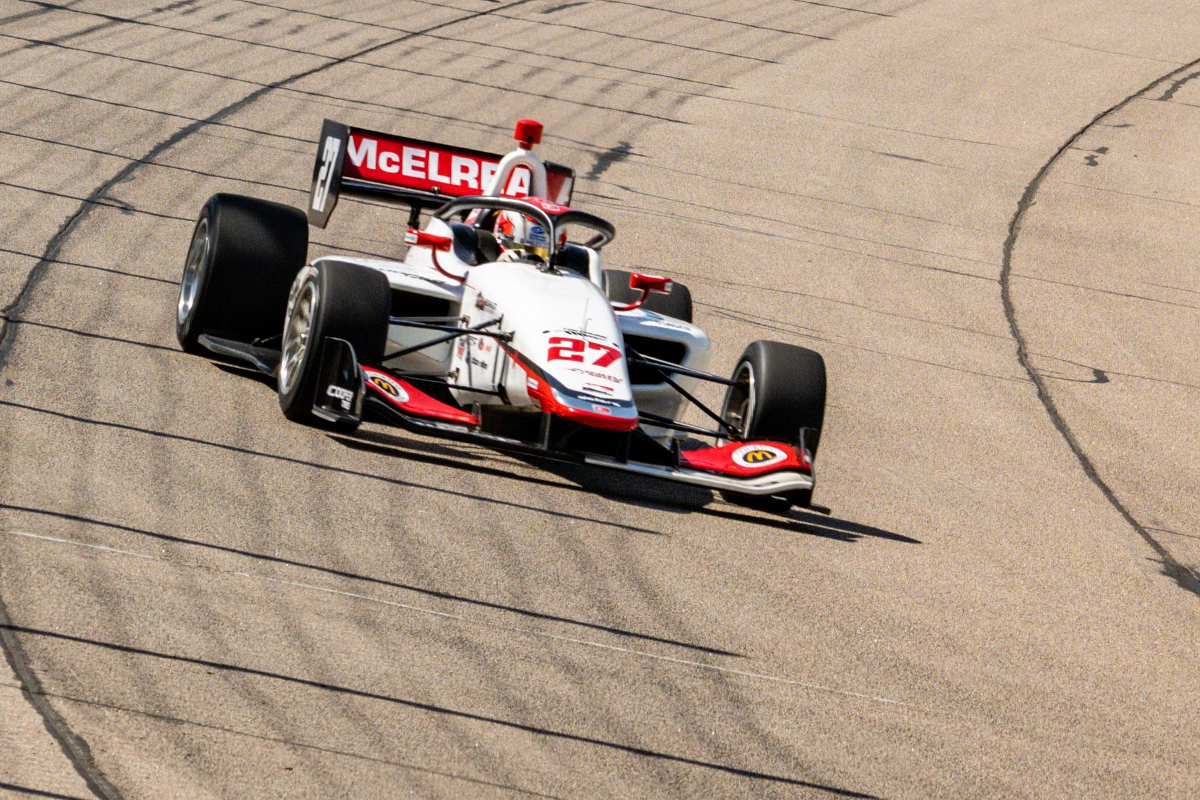 Hunter McElrea earned his second Indy Lights win in the series’ first oval race of 2022, but only after on-the-road victor Linus Lundqvist was penalised.

Poleman McElrea led the first 49 laps of the 75-lap race, which ran under caution from lap 41 to just before the end of lap 50 after an issue sent TJ Speed’s James Roe Jr into the outside wall at turn two.

McElrea started to drift upwards when the restart occurred, allowing the chasing Lundqvist to zoom past before they had even crossed the line to start the next lap.

A quarter of the way through the race there had been a 1.88-second gap between McElrea and Lundqvist, but the points leader spent the next 10 laps trimming it down and on one lap he briefly got ahead by diving down McElrea’s inside. However the outside line allowed McElrea to carry more speed and so he then nosed back ahead, before Lundqvist got by again into turn one briefly the next lap.

Lundqvist’s final effort was cut off by McElrea and it allowed Sting Ray Robb to close in and get on the inside of Lundqvist at turn three. Again it was the outside line that allowed drivers to carry more speed though, as Matthew Brabham made it three-wide on the lowest line, meaning Lundqvist was in second when the caution period came.

Brabham passed Robb before the yellow flags were waved, and Christian Rasmussen tried to find a way by too, then at the restart Braham went down the inside of McElrea at turn two and set about chasing Lundqvist.

As McElrea encountering the disrupted air of backmarkers had allowed Lundqvist to close in, so Brabham was able to hunt down Lundqvist for the same reason and was just a few tenths of a second behind with 13 laps to go.

With eight laps remaining he tried a move at the final corner but had to duck out to avoid contact, then with five laps left he went for the outside line at turn two. He got his car just about alongside, but Lundqvist’s spotter told him he was clear and he kept on moving to the high line until he hit Brabham.

With a missing nose cone and broken front wing, Brabham held on to second until the final lap when McElrea got by at turn two and Rasmussen got him at the finish. Lundqvist meanwhile won by several seconds, only for stewards to put him behind Brabham in the final race result and thus handing McElrea victory.