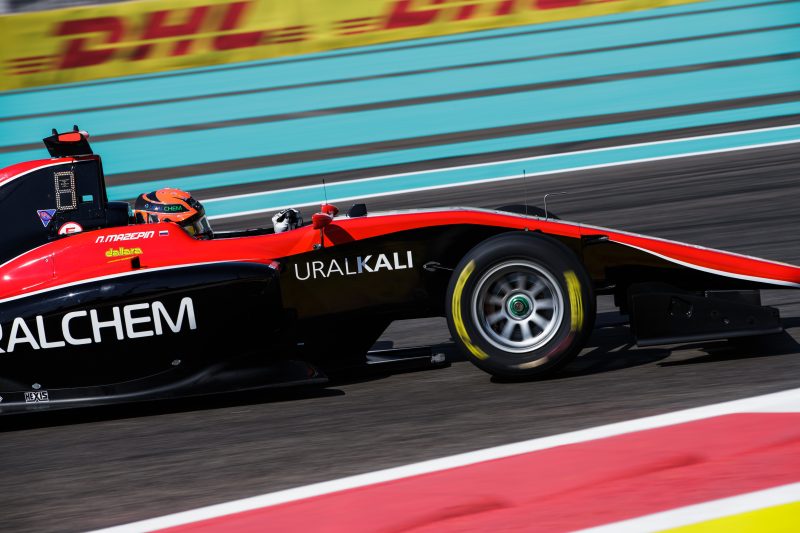 Nikita Mazepin reduced his points deficit to Anthonie?Hubert to 28 points after taking a maiden GP3 Series pole position ahead of the final two races of the 2018 season.

Hubert, who entered this weekend with a 32-point championship lead and can only be beaten to the championship by his ART Grand Prix team-mate Mazepin, qualified in third.

The championship leader held provisional pole mid-way through the session, but as the track evolved significantly during the final runs the times fell significantly.

Mazepin was only seventh ahead of his final lap of the session but managed to post a 1m54.885s benchmark – improving by over eight tenths – to topple the then provisional polesitter Leonardo Pulcini, despite the Campos driver having seemingly consolidated first place with his own improvement moments before.

Hubert also posted his best time with the final lap of the session, but was 0.156s behind the polesitter.

All four ART cars featured in the top five, with Jake Hughes and Callum Ilott in fourth and fifth respectively – Ilott having entered his final lap of the session provisionally on the front row.

Trident’s David Beckmann beat his team-mates to sixth. Practice pacesetter Giuliano Alesi suffered an off-track excursion after locking up at Turn 17 on his second lap of the session and finished seventh. Ryan Tveter factored in the top three early on but eventually qualified eighth.

MP Motorsport’s Richard Verschoor teased a potential top six position on the grid, before slipping to 12th after failing to improve on his final effort.