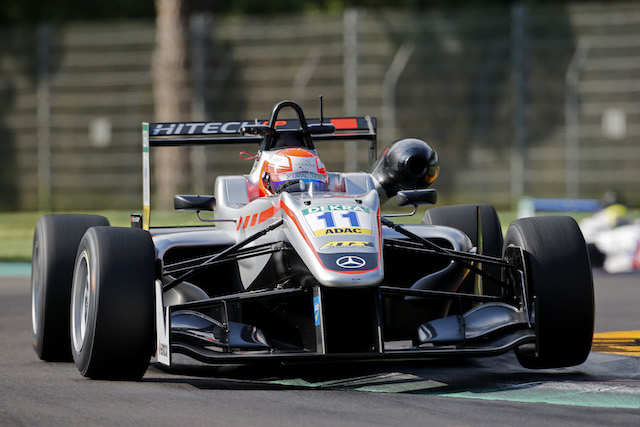 Hitech GP has confirmed that?Nikita Mazepin will stay with the FIA Formula 3 European Championship team for a second season in 2017.

The 17-year-old Russian stepped up from Formula Renault to F3 for his second year in car racing in 2016, and finished 20th in the final standings after four points finishes.

He also became a development driver for Force India, making his debut on track in the Silverstone test, in a deal supported by father Dmitry, a key sponsor of?the Hitech F3 project?through his chemicals companies.

?I had a good first season in Formula 3,” said?Mazepin.

?Of course, it was a steep learning curve as it was only my second full season in car racing.

“I managed to show at certain points, particularly Spa, Paul Ricard and Hockenheim, where I had my first rookie podium, that I have the potential to make the step up next year to fight at the front. This is the target.?

?He had some really strong races, particularly Spa and Hockenheim, where he showed he has the ability to be at the front in F3.

“We need to build on that and some consistency next season, if we do then Nikita can be at the sharp end of the field throughout the year.”

Last week, Ralf Aron was signed from Prema to join Mazepin in the Hitech line-up, with a third driver – believed to be GP3 racer Jake Hughes – set to be announced shortly.